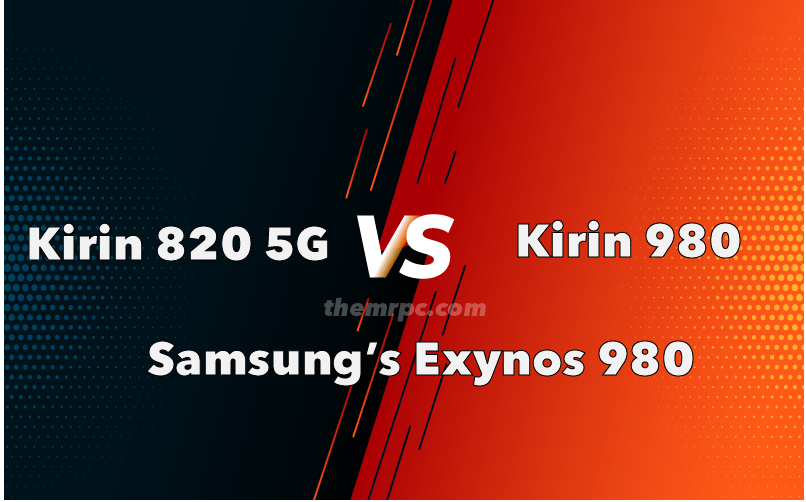 If we look around, then we will find that most of our friends, office colleagues and other people are using a smartphone powered by a mid-range SoCs. Nowadays most of the company are coming with a Mid-Range processor powered smartphones which can easily give a head-to-head competition to some recent flagship smartphone available in the market. One of the most popular mid-range SoC among those well-known names is the Hisilicon Kirin 820 5G.

Chinese smartphone brand Huawei recently launch Honor 30s in the market, in which company has used a new mid-range Kirin 820 5G SoC in it. Prior to that, the Snapdragon 765G from Qualcomm was the one in particular who was giving incredible performance, and 5G connectivity features in a budget range smartphones. But now we have one player in the market i.e. Huawei who are providing low-budget SoCs that is capable of 5G connectivity along with a better gaming experience for mid-range smartphone users.

However, it is true that 5G networks are still not fully developed. And there are such a significant number of smartphone users around the world who will like to have a 4G SoC with flagship specifications. For such users there are two high performance smartphone CPU, the Kirin 980 and Exynos 980. It will be best option for those users to choose with. Both the SoCs have a brilliant reputation of fueling a portion of the popular smartphones of the industry. Yet, is it option to go with any of these rather than Kirin 820 5G? We will address that question in this article while comparing the Kirin 820 5G and the Kirin 980 and Exynos 980. So let’s go with this article.

CPU is the main hardware component of any smartphones. Most of the time we tell about performance of the smartphone by knowing the name of the processor which is used by device. Okay, now coming to the CPUs features of all three SoCs.

Moving on to the other SoC in the list which is Kirin 980. Hisilicon Kirin 980 is an Octa Core mobile CPU, and it has a 2+2+4 cores configuration. It means this CPU has 2+2+4 tri-cluster cores in which two are high performing on Cortex-A76 clocked at 2.6GHz, two mid- performing Cortex-A76 cores clocked at 1.92GHz speed and four power efficient Cortex-A55 clocked at 1.8GHz speed.

Now the third SoC in the list, the Exynos 980. The other two chipset have tri-cluster architecture design and Exynos 980 is the only CPU in this comparison chart that has a dual-cluster design. However, it is also the only one which comes with high performance Cortex-A77 CPU cores. Okay, coming on to the detailed information about the CPU. The Exynos 980 is an octa-cores CPU with 2+6 dual-cluster design. It has two high performance Cortex-A77 CPU cores clocked at 2.2GHz. Remaining six cores are power efficient Cortex-A55 based clocked at 1.8GHz speed.

Looking at the gaming department of these processors, we have found that Kirin 820 are using new mid-range GPU lineup from ARM. The chipset has the Mali-G57 GPU which announced last year along with Mali G-77. The Mali-G57 MP6 GPU is a 6-core tuned version of the G57 series. It is based on ARM’s new Valhall architecture design, which promises up to 30% better performance density over the previous generation of Mali-G52 GPUs. This newly released chipset “Kirin 820” has GPU Turbo and Kirin Gaming 2.0 which will enhance the gaming experience in the mid-range smartphone.

The second processor is also coming from the Hisilicon, which is the Kirin 980. The Kirin 980 comes with Mali-G76 MP10 GPU. This GPU works on the company’s older Bifrost architecture. The same architecture is also used in its previous Mali-G52 GPU. But its hardware has more cores and better clock speed. It makes Mali-G76 GPU more powerful than the Mali-G57.

Now last in the list Smasung’s Exynos 980 CPU. However, chipset also has the ARM-build GPU from the Mali-G76 lineup. But wait, this one is different. Exynos 980 CPU are built with Mali-G76 MP5 GPU which has 5-cores. It works on the same Bifrost GPU architecture design. However, the GPU is expected to perform the lower in these three.

The Kirin 820’s AI hardware has comes from the same Da-Vinci NPU design. The Kirin 990 and Kirin 810 processors are using the same design. However, the 820 has one big core than Kirin 810 in the NPU design. It maximizes the AI performance and uplift of up to 73%.

The Kirin 980 has the older Dual-NPU design which is not as good as the Kirin 820’s Da-Vinci NPU but is still a pretty capable dedicated AI hardware.

The Exynos 980 is built with integrated NPU. It is the Samsung’s home-grown Neural Processing Unit. Still, Samsung has not revealed much about its top-notch capabilities. So don’t make hopes because Exynos 980 would perform the least in the raw AI performance.

Now moving to the ISP and image processing specs of these processors. The Kirin 820 5G are using a new ISP 5.0 design in this SoC. The new ISP 5.0 uses high-level noise reduction technologies which enhance the image processing in the device. If you don’t know it is the same ISP which have been used in Kirin 990 and 990 5G. So we can say it has flagship level image and video processing features which ultimately uplift the performance of the mid-range devices.

Other CPU from the same Chinese brand are the Kirin 980. The Kirin 980 CPU is the older CPU, which is the predecessor of the Kirin 990. As it is older than Kirin 990, do not expect that it will have better ISP feature than the Kirin 820 which is relatively new. Kirin 980 uses Dual ISP design embedded in the CPU.

Now last but not the least the Exynos 980. Still, Samsung is not revealed by the name of the ISP which is used in this CPU. However, the Samsung let us know that the ISP has a capability to support up to a 108MP sensor.

Recommended: Specs Comparison: MediaTek Helio G70 vs Helio G80 vs Helio G90T | Which one is faster?

On the other hand, Exynos 980 are using Exynos 5123 5G modem. The Kirin 820 5G and Exynos 980 both CPUs are using a 5G modem which is integrated within the SoC. The SoC are the multi-mode modems and supports all networking types such as from 2G. 3G, 4G, and 5G.

Don not think that both 5G modems are same. The Exynos 980’s 5G modem is the SA Sub-6 supported modem whereas the Balong 5G modem is SA/NSA sub-6 and mmWave supported. In short, the Kirin 820 has more widely compatible 5G connectivity as compared to the Exynos 980. The Exynos 980’s mmWave incompatibility makes it get restricted to just eastern countries.

The AnTuTu and Geekbench Benchmarks benchmark scores of these SoCs are as follows: 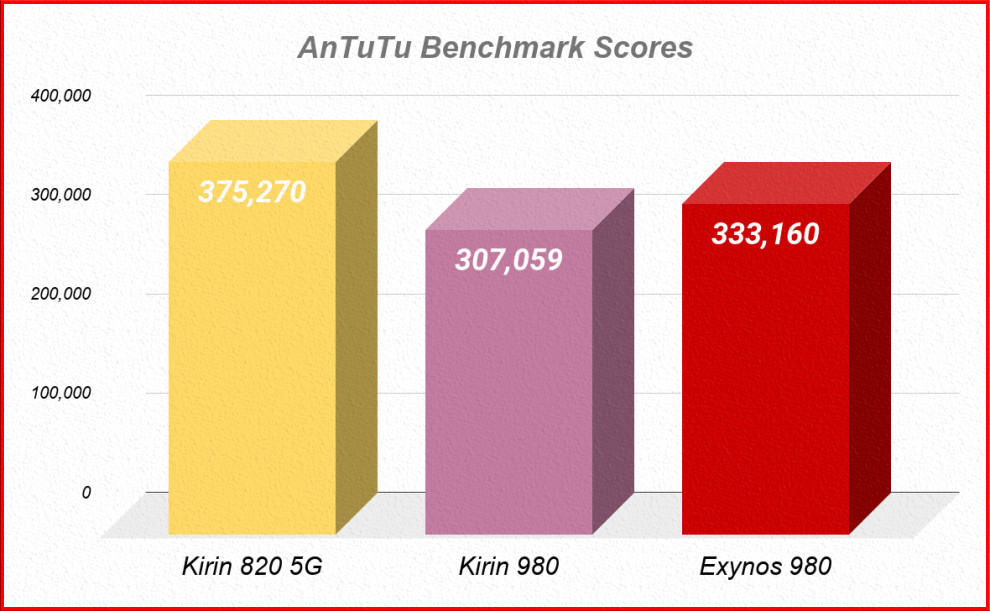 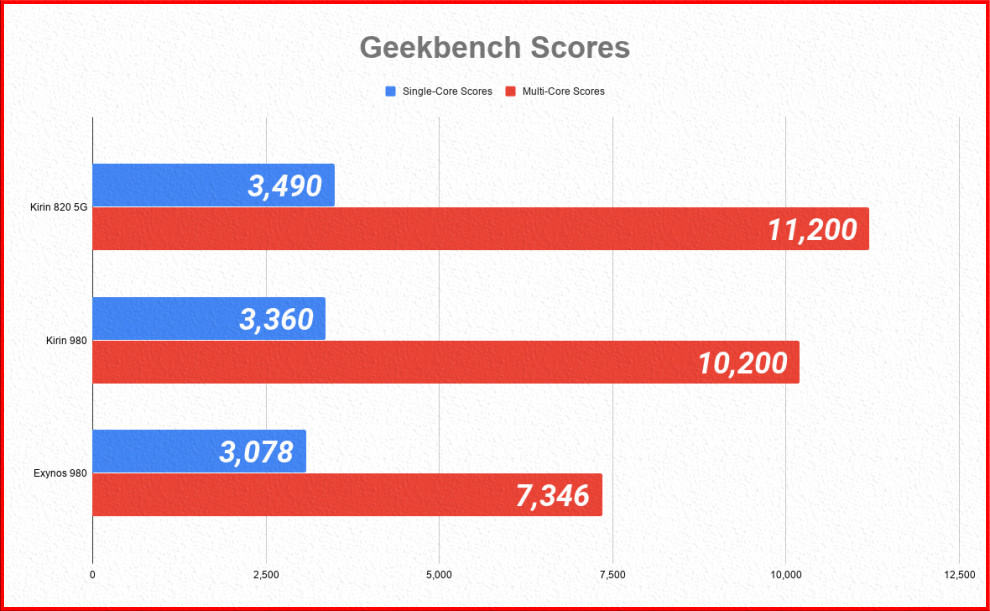 Conclusion: Which one is faster and better?

Okay now the final thought of this whole article which is one better and faster? After analyzing major specs of all three SoCs given in this article, we can say that the Kirin 820 5G is a better option in all. While the other hand Kirin 980 is the least come last in the comparison l chart. SoC as per the prevailing conditions. Samsung’s Exynos 980 processor could be the second best option after the Kirin 820 5G chipset. It is one of the best processors for the  mid-range devices that has 5G connectivity option. In any case, its modem despite everything has a few confinements, and thus the connectivity is additionally not as practical as Kirin 820s. Be that as it may, it is acceptable to see Cortex-A77 cores in a mid-extend SoC, and this is the motivation behind why the CPU of Exynos 980 is increasingly future demonstrated.