Specs Comparison: MediaTek Helio G70 vs Helio G80 vs Helio G90T | Which one is faster? 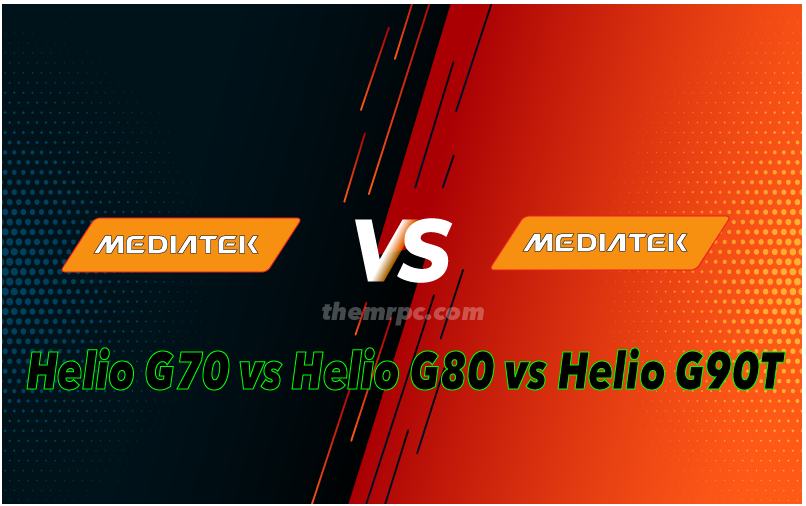 MediaTek recently expanded its “G” series by releasing Helio G70 and Helio G80 chipsets in the market for the budget or mid-budget smartphones. These processors are designed to fulfilled gaming need of the users in budget smartphones that is why here series name “G” making sense you know! MediaTek processors are not doing so well in a premium segment of smartphones so company is trying to boost its market in mid-range segment. As we know, mobile gaming is growing rapidly and peoples are desired to have a gaming smartphone in his hand with less or no heating issue and zero lagging. With the launch of two new SoCs: Helio G70 and Helio G80, MediaTek is all set to acquire the mid-range gaming section of the smartphones. Here, you should not be confused with MediaTek Helio G90T processor. That is a 5-6-month-old SoC, hence not so new.

If you know, MediaTek was doing very well in the lower mid-range segment of smartphones. But, due to many issues including hanging and lagging, people are started shifting toward the Snapdragon. That happened because Snapdragon came up better processors than MediaTek for budget segment. Now to improve its stability and position in mid-range department of smartphone, MediaTek introduced its gaming SoC “G” series. Last year in Q3, MediaTek released two processors for mobile gaming segment as: Helio G90 and Helio G90T. Yeah! It was quite successful for the company. So, they came up with a few more SoCs with some improvement and new features. Now in Q1 2020, company have added two new SoCs: Helio G70 and Helio G80 to presence in gaming market. Helio G70 and Helio G80 SoCs are the direct competitor of Qualcomm Snapdragon 600 series and 700 series.

MediaTek G90T was a turning point for the company and with Helio G70 and G80, its gaming SoCs portfolio even more enhanced. Okay enough talk, let’s come to the main point. In the article we will review and compare specification or features of MediaTek Helio G70 vs Helio G80 vs Helio G90T. We will let you know the differences, improvement and new features in the processors. So, let’s look into it.

To review the CPU performance of all three SoCs, here we begin with MediaTek Helio G70.  However, each CPU in the list has 8 cores and these cores are divided into two clusters. The only difference among these are the clock speed of the cores in the clusters. Mediatek Helio G70 has the powerful two Cortex-A75 cores clocked at 2.0GHz and six power-efficient Cortex-A55 clocked at 1.7GHz. Helio G80 also has the same two bigger Cortex-A75 cores with the 2.0GHz clock speed, but remaining six cores are slightly better than G70 with a 1.8GHz clock speed.

However, all these CPU are working on a 64-bit architecture and operating on 12nm fabrication process. To be honest with the fact that 12nm semiconductor size is not so good or you can say “not so power efficient”. As we earlier said, these three SoCs are the competitor of Snapdragon 730G which is build on a 8nm process and has a good power efficiency. But keeping budget-range in mind, the SoCs are performed actually very good. Yeah! you can thank the good optimization made by MediaTek, but still it is not so power efficient. Reviewing all CPU specs of Helio G70 vs G80 vs G90T, without any doubt you can say that Helio G90T is most powerful in CPU department. Here Helio G90T is the winner with its seamless performance and powerful CPU features among three.

Connectivity makes a huge difference when it comes to the heavy mobile gaming. Here, both Helio G70 and Helio G80 has the same downloading and uploading speed. Both Helio G70 and G80 use the same 4G modem and max 300Mbps download speeds and 150Mpbs upload speeds.

However, the uploading speed of MediaTek Helio G90T is also same with 150Mbps speed. But with an integrated 4G modem, it can able to offer maximum 600Mbps download speed. Now, if take a look on the other connectivity features of all these three chipsets we will able to find a bluetooth 5.0, WiFi 5 (a/b/g/n/ac), Beidou, Galileo, Glonass, GPS, NFC and FM Radio supported feature as well.

Maximum camera support feature for MediaTek Helio G70 and G80 are very much similar. Both the SoCs support up to a single 48MP 4-cell camera or traditional 25MP single lens which can shoot @30fps. Both SoCs has the ability to support upto a dual 16MP + 16MP on both front and rear panel. The Helio G70 and Helio G80 has the ability to record 2K videos @30fps and 1080p Full HD+ video @60fps.

However, here again MediaTek Helio G90T wins the race with the support of a 64MP single camera @22.5fps or single 48MP camera @30fps. In the dual-camera department, the SoC can support up to dual 24MP + 16MP sensors. So, here Helio G90T is the clear winner in camera segment.

Talking about the display features of these SoCs, all three have ability to support upto 1080×2520 pixels Full HD+ resolution. However, it is also a fact a very few mid-range devices offers this much resolution display in the phones. That is because, the more pixels resolution a display will have, the more battery consumption will occures. Hence, most of the mid-range offers maximum 1080p display. So, all in all, the maximum resolution support for the display is same for all three.

GeekBench is a processor benchmarking program in which a series of tests are performed on a processor and times are counted that how long the processor takes to complete the tasks. The quicker the CPU completes the tests, the higher the GeekBench score.

Here we will not talk about the Geekbench scores for Helio G70 and G80 because we don’t have yet. Talking about the GeekBench score for Helio G90T, it has passed 2,468 points in single-core and 7,514 points in multi-core. So, we can figure out that the SoC has decent perfomance.

Conclusion: Which one is faster?

So, all specs of the SoCs are reviewed with the fact, here MediaTek Helio G90T is the clear winner in all departments with faster speed. However, the other two: MediaTek Helio G70 and G80 are also not bad as the company is targeting the lower-end of smartphones segment for gaming. Considering the price, both the G70 and the G80 could be the solution for budget gaming in the smartphone industry.