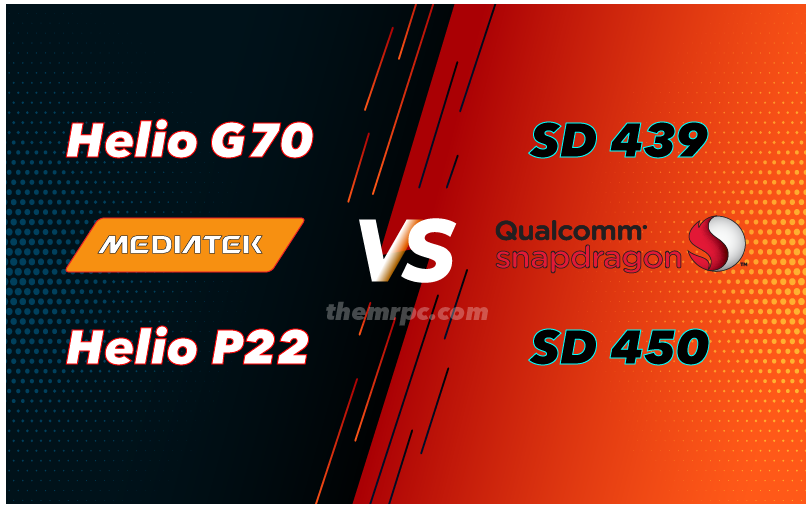 MediaTek has recently released the new Helio G70 chipset. Expanding its “G” series, the company has introduced this gaming-oriented chipset which is mainly focused on entry-level phones or mid-rangers segment. Taiwanese company MediaTek is the world’s 4th largest global fabless semiconductor company, and the latest launched of Helio G70 and G80 could be a game changing as the company provides these SoCs at an affordable price.

After the official announcement of MediaTek Helio G70, there are more companies which have announced their upcoming devices based on the latest SoCs. The latest low mid-range smartphone in the list is the Realme C3 that is launched in India with MediaTek Helio G70 processor. Its predecessor Realme C2 was based on Mediatek Helio P22 MT6762 SoC. This mid-range smartphone had a direct competition Redmi 8 which was launched last year with the Snapdragon 439 SoC.

Now coming on to the other two chipsets in the list: Snapdragon 439 and Snapdragon 450. Both these chipsets are for the budget segment of the smartphones presented by the Qualcomm. Qualcomm snapdragon 450 is an old SoCs in the 400 series while the Snapdragon 439 had a direct competition with Helio P22 by Mediatek.

MediaTek Helio G70 is a very powerful chipset with the HyperEngine game technology gives you uninterrupted gameplay for the mid-range smartphones. So, let’s do the comparison between MediaTek Helio G70 vs Helio P22 vs Snapdragon 439 vs 450 and see which one is better among these? In this article, we will find out the differences and also conclude which one is faster?

Starting from the CPU features of all these chipsets. All of these are the Octa-Core SoCs but everyone is divided into different clusters. The semiconductor size of MediaTek Helio G70, Helio P22 and Snapdragon 439 is 12nm while the Snapdragon 450(2-year-old SoC) fabrication process is based on 14nm technology. The MediaTek Helio G70 has 8 cores which is divided into two powerful Cortex-A75 cores clocked at 2.0GHz and six Cortex-A55 clocked at 1.7GHz. Moving on to the other CPU from the same manufacturer, Helio P22 also has Octa-core CPU and all eight cores are Cortex-A53 clocked at 2.0GHz.

Now, we understand that the MediaTek Helio G70 is the more powerful CPU than three other in the list, now comes to the GPU feature of these chipsets. Helio G70 uses the Mali-G52 2EEMC2 GPU, Helio P22 uses IMG PowerVR GE8320 GPU. The other two from Qualcomm: Snapdragon 439 and 450 incorporated with Adreno 505 and 506 GPU, respectively. Both Adreno 505 and Adreno 506 are very much identical to each other, not so much difference. If we test these two with Mali-G52 2EEMC2 GPU, this latest GPU from the Mediatek has more power to handle graphical things on the smartphones. IMG PowerVR GE8320 is an old GPU card than Mali-G52. So, it is pretty obvious that new Mali-G52 is much better graphic card with some improved technology than IMG PowerVR GE8320.

So, concluding the whole CPU and GPU figure, Helio G70 is winner among the Helio P22, SD439 and SD450 in both department. Hence, if you have a tight budget in your hand then you can choose Helio G70 powered smartphone as an ideal choice.

In the Artificial Intelligence & Machine Learning department, you should not keep higher expectation because none of these have performed very well. All these SoCs provides decent AI experience in the budget-range but the Helio G70 gives you the best AI experience among these SoCs.

According to the official document for Helio G70, “Fast AI performance is ideal for popular AI-camera tasks such as object recognition (Google Lens), Smart Photo Album, scene detection and segmentation with background removal, and Bokeh-shot enhancements.

Connectivity plays a very important role in any smartphone. It does not matter you have a budget, mid-range, or premium smartphone in your hand. You need a good connectivity for playing games, making a video call or doing some other things on your phone. However, the connectivity feature of all these chipsets is pretty much the same but MediaTek G70 chipsets offers faster internet speeds. Helio G70, Helio P22 and Snapdragon 450 offers 300Mbps download and 150Mbps upload speeds while Snapdragon 439 offers 150Mbps download and 75Mbps upload speeds. The 2-year-old Snapdragon 450 SoC has LTE X9 modem while the Snapdragon 439 comes with X6 modem. So, here SD 439 is the least in the list and there three has same Download/Upload speed.

Moving forward for two SoCs from Qualcomm: Snapdragon 439 and Snapdragon 450. The SD439 can support max 21MP single camera and dual 8MP + 8MP cameras. Now the old one SD450, it can up to 24MP single camera and dual 13MP + 13MP cameras on both side of the phone. So, in camera department Helio G70 is the winner with it max 48MP camera support for the device. None of the chipset offers this much amount of camera support feature. So, here we go again for Helio G70.

Both the MediaTek chipset: Helio G70 and P22 support LPDDR4x RAM. The SD439 and SD450 support only LPDDR3 RAM. In comparison, LPDD4X RAM is way faster than LPDDR3. All SoCs has eMMC5.1 internal Storage support but here G70 is slight better as it supports UFS2.1 flash storage.

GeekBench is a processor benchmarking program in which a series of tests are performed on a processor and times are counted that how long the processor takes to complete the tasks. The quicker the CPU completes the tests, the higher the GeekBench score.

Realme C3 is the latest device in the market with Helio G70 chipset inside the hood. Looking at the AnTuTu score of the device, it scores 194,170 points in Antutu v8. The Snapdragon 439 with 80,855 points, MediaTek Helio P22 with 76,852 points and Snapdragon 450 with 73,851 points stands on 2nd, 3rd, and 4th place respectively. In terms of AnTuTu, the device performs better which has higher score.

Conclusion: Which one is faster?

Now, we have compared most of the details in these CPUs. Without any doubt, we can say Helio G70 is way better and faster than the Helio P22, Snapdragon 439 and Snapdragon 450. Helio G70 is the good choice if you are looking for a device with good gaming experience and high performance. It should best pick for your need.