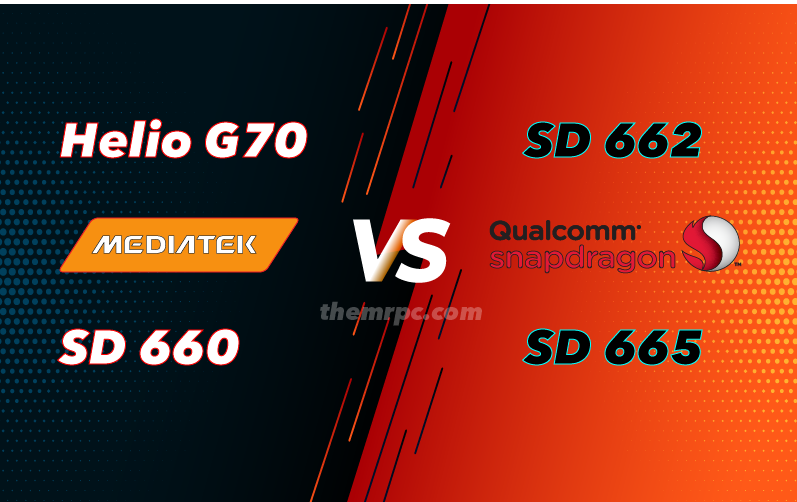 Qualcomm has a very good track of performance in mid-range smartphones. To enhance its performance in entry-level and mid-range section, Qualcomm introduced three new SoCs last month. Qualcomm announced Snapdragon 720G, Snapdragon 662, and Snapdragon 460 chipset with some improvement and new features from its previous SoCs in these series. From the list of new release, here we will talk about Snapdragon 662 processor. The SD662 brings connectivity features like Wi-F 6 and NavIC (Navigation with Indian Constellation) which is a new GPS technology developed by ISRO (Indian Space Research Organization).

So, here in this article we will compare newly released Snapdragon 662 with its previous Snapdragon 665 and Snapdragon 660 (The oldest SoCs in this list). We will review the CPU, GPU, AnTuTu-GeekBench scores, connectivity, camera and display features of these SoCs. We are including MediaTek G70 as well because this SoC also come under the same price segment and designed for the same budget-range audience.

Now coming to the CPU architectures of SD662, SD665, SD660 and MediaTek Helio G70. All four SoCs are the octa-core processors with a 64-bit memory architecture. Here, both the SD662 and SD665 have identical CPU features. Both have four high performance Kryo260 Gold Cortex-A73 cores clocked at 2.0GHz and four power efficient Kryo260 Silver Cortex-A53 cores clocked at 1.8GHz. The other member in Snapdragon 600 series, the Snapdragon 660 also has the four high performance Kryo260 cores like SD 662 and SD665 but gets a slight boost in clock speed which is 2.2GHz. The remaining four cores have the same Kryo260 Silver Cortex-A53 cores clocked at 1.8GHz just like other snapdragon SoCs in the list.

Here, in GPU department Medaitek Helio G70 has the best GPU configuration while the outdated Snapdragon 660 come last in this list. The MediaTek Helio G70 has the dual -core Mali-G52 2EEMC2 GPU with 825MHz clock speed. This GPU has also been used in the Kirin 810 by Huawei technology. On the other hand, Snapdragon 660 uses Adreno 512 GPU which is quite old and does fit in 2020 technology.

In compare to other SoCs, MediaTek Helio G70 comes last in the row with less connectivity features than other three SoCs. Its modem has a maximum download speed of 300Mbps and a maximum upload speed of 150Mbps.

Here we will talk about the Image Signal Processor (ISP) of these CPUs to give you a short info to measure camera features. If you don’t know what the ISP is in any mobile platform, we will make it easy to understand.

“Taking the light from your camera sensor and transforming that into a beautiful looking picture is a complicated process involving a worryingly large amount of math and processing. Fortunately, digital cameras and smartphones handle this in an energy efficient way through the use of a dedicated ISP. Qualcomm Technologies integrates this hardware right into its platforms, such as the cutting-edge Qualcomm Spectra(™) 380 ISP inside the Snapdragon 855. This is a dedicated processing unit specific for photography and video that sits right alongside the CPU and other processing components.

So about that math. An ISP is built to handle a number of essential photography and video recording tasks. For starters, the ISP inside your phone runs the autofocusing algorithm that keeps your pictures sharp and in focus.”

Here we do not know ISP information of Helio, as per the official information from MediaTek, the SoC can support up to 48MP single-camera or up to 16MP in dual-cameras in both panels of the phone. The Snapdragon 660 is last in this list with a 24MP single-camera and 16MP dual-cameras support in both panels of the device. All three CPU from Snapdragon: SD 660, SD 662 and SD 665 have ability to record 4K videos at 30fps. However in Helio G70, it has restricted at 2K video recording at 30fps.

Now come to the MediaTek Helio G70. Without having any particular name for DSP, the company claims to have Fast AI-Performance. As per the company claim, its Fast AI performance can able to handle all AI-camera tasks including as object recognition (Google Lens), Smart Photo Album, scene detection and segmentation with background removal, and Bokeh-shot enhancements. Apart from MediaTek NeuroPilot and Android Neural Networks API (Android NNAPI) supports, it also provide support for many other third-party AI frameworks. So, if we concludes whole figure in short, the Helio G70 has similar AI performance and abilities like Snapdragon 662 and Snapdragon 665.

Like the GeekBench, AnTuTu score of Snapdragon 662 and MediaTek Helio G70 is also not available right now. So we will add those scores later whenever it available. Now coming to the remaining two: SD 660 and SD 665.

Conclusion – Which one is faster?

Snapdragon 662 and MediaTek Helio G70 are the newly released SoCs and it should consider more than Snapdragon 665 and Snapdragon 660. Both the newly launched chipset provide some new feature and comes with some improvements as well. The SD 660 is old CPU  so we should ignore it. In the mid-range section, MediaTek Helio G70 provides great value fro money performance which will definitely help to improve company reputation in budget segment of smartphone. While Snapdragon 662 provide new connectivity feature “NavIC” and “WiFi-6” matches with the modern need in technology.