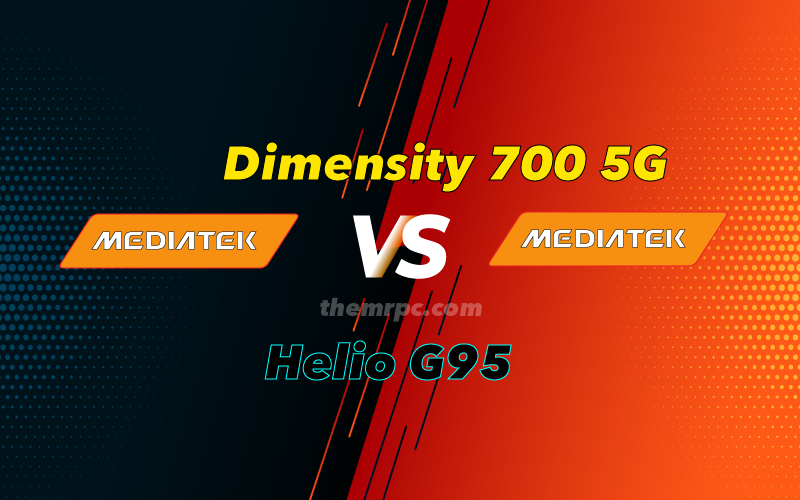 In the mobile market, MediaTek’s two midrange chipsets are starting to make their way into smartphones. In contrast, Dimensity 700 is used for budget 5G smartphones and G95 is a gaming-centric processor under the Helio series. A number of new smartphones with Helio G95 power have been released, including Realme Narzo 20 Pro, Realme 7, and Redmi Note 10S. Many 5G smartphones, including Realme 8 5G, Oppo A53s 5G, and Poco M3 Pro 5G, are equipped with Dimensity 700 SoCs.

The prices for these devices are, however, similar across the board in the Indian market. It is important that you understand the differences between their CPUs, GPUs, etc. This article compares both of these SoCs in detail to see which one is better.

In contrast, the Dimensity 700 SoC utilizes 12nm node technology from TSMC while the Helio G95 uses TSMC’s 7nm technology. In this regard, we can see that Mediatek’s 700 SoC is more power-efficient than the G95. On both chipsets, there is an octa-core 64-bit processor. There are two Cortex-A76 large cores in Dimensity 700, each clocking at 2.20 GHz and six Cortex-A55 small cores at 2.00 GHz.

Also Read: Comparison: Qualcomm Snapdragon 670 Vs Snapdragon 845 | Which one is faster?

The clock speed and number of cores are key factors to consider in this comparison block. In terms of CPU frequency, Dimensity 700 is 6% ahead of Helio G95. In addition, remember that high CPU frequency decreases battery life because it consumes more power. So, In comparison with G95, Dimensity 700’s higher clock speed can improve CPU performance.

On Dimension 700, the GPU is a Mali-G57 with a clock rate of 950 MHz, while on Helio G95, the GPU is an ARM Mali G76 with a maximum clock speed of 900 MHz. Clearly, Dimensity 700’s graphics processing unit (GPU) is working faster because of higher clock speed. A higher clocked graphics card adds 50 MHz to the difference. The Helio G95’s Mali-G76, however, provides better overall performance. According to Antutu v8, the GPU result confirms this conclusion. Therefore, Helio G95 comes out on top in the GPU department.

However always keep in mind, While the frequency of the GPU is an indication of its performance, it doesn’t always tell us the real story. The shader units and cores of a graphics chip, as well as the number of GFlops it has, should be taken into account when evaluating its capabilities.

Conclusion: Which one is better?

According to Notebookcheck, Realme 8 5G (8GB) with Dimensity 700 managed to score 261067 points in Antutu v8, while Realme 7 (8GB) achieved 295778 points. In this case, the differential gap amounts to 13.29 %. As a result, Helio G95 is the clear winner in terms of overall performance. You should select Helio G95 if you want a gaming-specific smartphone. Dimensity 700 powered smartphones are a good option for consumers seeking a budget-friendly and energy-efficient 5G phone.