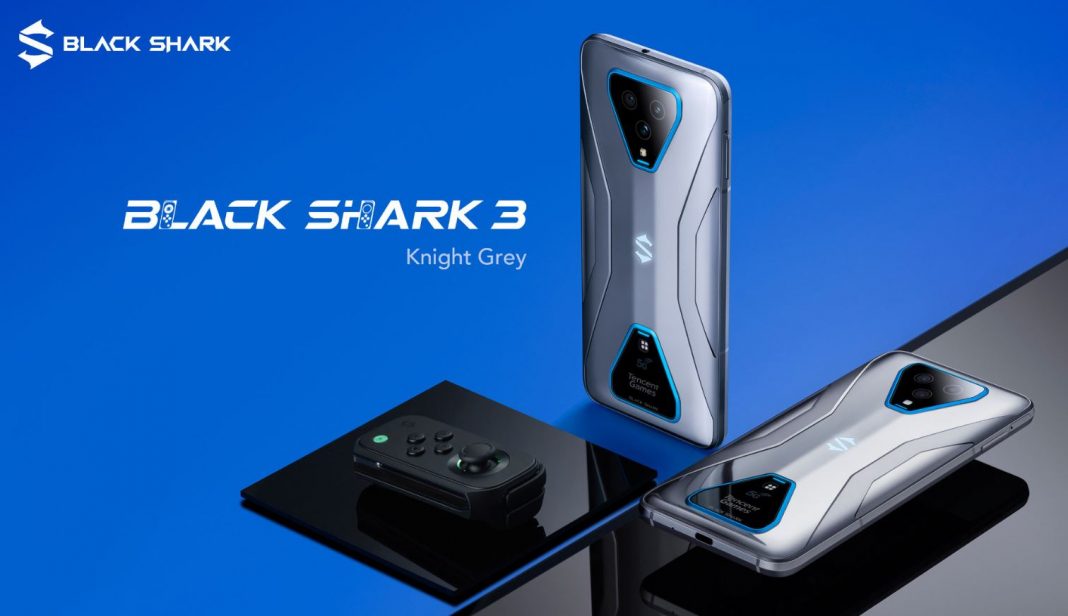 Xiaomi’s gaming smartphones series: Black Shark 3 and Black Shark 3 Pro has now official. The Qualcomm Snapdragon 865 is powering both the device. The pro variant of the series has a big 7.1 inches super reactive AMOLED screen while the standard model (Black Shark 3) come with a 6.67 inches display. Both the devices gets a huge RAM option such as 8GB and 12GB of RAM. These smartphones have also support for networks 5G .

After the success of the Black Shark 2, less than a year Xaiomi has come up with the Black Shark 3 series. The design of the smartphones is completely new from both inside and out. From the outside, the relationship with Black Shark 2 is known almost only for the green hints and the reference to the usual robotic shapes, because in fact even the Shark S LED feature has changed a lot, decidedly more stylized with the double reference to the fin of shark.

Moving on, the most highlighted thing in the smartphones is the very unique triangular shape of the cameras module. The triangular shape is given on both side: Top and Bottom. The bottom module has PINs for quick charging which is also a unique concept. Between these triangular shape, there is the logo of the device in the middle of the back panel. Apart from this there are something more, such as the two additional buttons for games, with a stroke of 1.5 mm, the fourth-generation liquid cooling system and the four pressure-sensitive zones on the screen for additional inputs.

Now, looking at the screen, the front of Black Shark 3 is more classic with a panel without notches and holes but more optimized than usual in terms of spaces, despite the important size: 6.67 inches diagonal for the panel of the standard variant and even 7 Inch for Black Shark 3 Pro.

Both the smartphone has featured with an OLED display with a refresh rate at 90 Hz and a tactile sampling frequency at 270 Hz with a touch latency of just 24 milliseconds; all numbers that, incidentally, are useful to make the most exciting phases of the game sessions enjoy.

In addition to Black Shark 3, some accessories have also been announced which, as can be guessed, aim to amplify their effectiveness in the sector that belongs to them, that of gaming. Blackshark Gamepad 3.0, a pair of headphones and a clip fan are the products that come as a dowry with the third generation, accessories that can be purchased however separately.

The gamepad , Blackshark Gamepad 3.0, costs 199 yuan (about 25 euros) and is very similar to the model it takes over, the one presented with Black Shark 2, and has four rhombus positioned buttons and a joystick above.

Instead, there are no indications regarding the price of the headphones , of the in-ear and wireless type, albeit remarkable for the declared autonomy: 14 hours of declared music reproduction. On them it should be emphasized that they are equipped with Bluetooth 5.0 and that they have RGB light effects that can be activated when in use.

And finally the Frozen Back Clip Pro , the most curious accessory that, using a semiconductor cooling system, guarantees a power of 9 watts and a heat dissipation area equal to 11,000 mm square, which means to cool to 14 degrees a hot device in a minute as stated. The price? 179 yuan (around 23 euros).

Pricing and availability of Black Shark 3 and 3 Pro

Black Shark 3 and Black Shark Pro 3 have been announced for the Chinese market, where they are available in colors Faerie Pink, Frozen Silver, Midnight Black and Gray Knight to the standard, in Gray and Phantom Black Knight Pro.

The first is pre-orderable today but will be on sale from Friday 6 March; a few more days for the Pro variant which will be available in pre-order in China from 10 March, on the markets from the following 17. These are the configurations and prices :

Also Read: Honor V30 and Honor V30 Pro 5G are getting Magic UI 3.0.1.169 update in China, Knuckle gesture was added in this update

Previous article
Honor V30 and Honor V30 Pro 5G are getting Magic UI 3.0.1.169 update in China, Knuckle gesture was added in this update
Next article
Comparison: MediaTek Helio G70 vs Helio P22 vs Snapdragon 439 vs Snapdragon 450 – Which one is faster?
Share
Facebook
Twitter
Pinterest
WhatsApp