Comparison: Qualcomm Snapdragon 670 Vs Snapdragon 845 | Which one is faster? 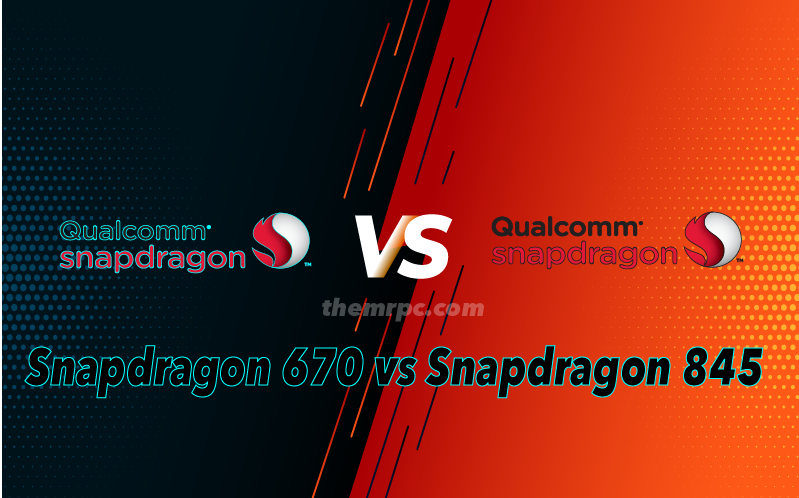 Specs Comparison: MediaTek Helio G70 vs Helio G80 vs Helio G90T | Which one is faster?

Moving on to the camera features of both CPUs. The flagship CPU Snapdragon 845 has an Spectra 280 dual 14-bit ISP (14-bit 2x processor). It allows up to 16MP dual camera at 30fps, 16MP Single camera at 60FPS, 32MP Single camera with 30FPS and a slow-motion video recording up to 720p at 240FPS. The SoC can support up to 48MP single sensor with MFNR and a 192MP single sensor without any manipulation.

The Snapdragon 670 has a Spectra 250 dual 14-bit ISP (14-bit 2x processor). It allows up to 16MP dual camera at 30fps, 25MP Single camera at 30FPS. The SoC can also similar 48MP single sensor support with MFNR and a 192MP single sensor without any manipulation. However, 192MP camera is only on paper. Because in practical, as of now we have only seen a 108MP of maximum camera sensor support in any smartphone.

If we don not count similar features and specs such as both build on 10nm fabrication technology, has the same Cortex-A75 and A-55 architecture, and also the same DSP feature, the Snapdragon 845 is ahead in almost all department. The Snapdragon 845 has a powerful CPU with 2.8GHz clock speed, Powerful 630 GPU and a powerful X20 LTE Modem that provides best connectivity features. However, it is not right to compare a flagship CPU to a Mid-range offering CPU. Both are the best SoCs in their respective segment. So, it is up to you to choose either a flagship processor or mid-range offering processor. It all depends what is your budget.