How to Fix Back 4 Blood Crashing on Windows 11?

If you are experiencing difficulties running Back 4 Blood on Windows 11, follow the steps below to fix the issue. 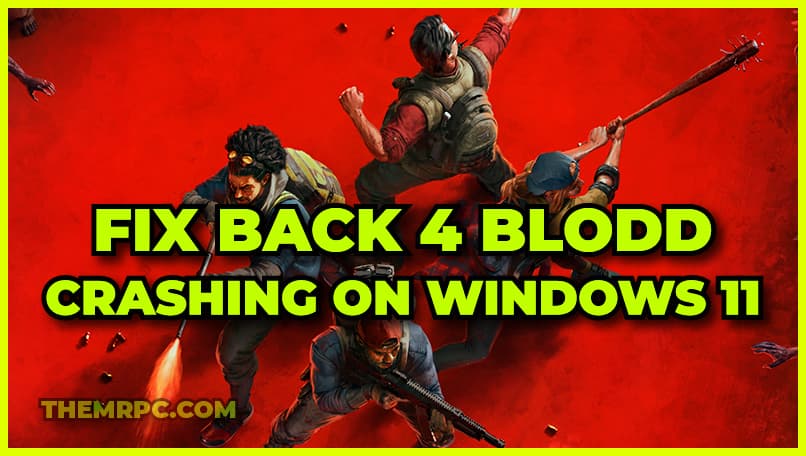 It looks like another game is suffering from bugs on Windows 11, and this time it’s Back 4 Blood. Crashing reports for the Back 4 Blood started to surface yesterday on Reddit. This game-breaking bug is affecting Windows 11 users as when they launch the game and let it go to a cutscene, the game will start stuttering and eventually crash. The issue is quite persistent and players have been complaining about it for a few days now. This guide will help you fix the Back 4 Blood crashing at launch issue.

The game is on steam with an incredible amount of positive user opinions. Thousands of players are already playing the game, and we can’t wait to see how well it continues to do in the next few months. Unfortunately, many players are facing an issue in Back 4 Blood where the cutscenes cause crashing for Windows 11 users.

For Windows 11 users, there is a bug in the game that causes the game to crash. In consequence, when a cutscene plays during a campaign, the game will go silent. Players who let a cutscene play to the end or skip the cutscene would start to experience stuttering in the game, leading to it stopping or crashing entirely.

Despite having some issues running in certain computer configurations, the game is quite well optimized and runs at a decent frame-rate. There are also settings that can be adjusted in order to increase performance and gain a smoother experience in general. Some users have, however, reported crashing at launch issues.

The crashing issue with Windows 11 caused by its cutscenes will soon be fixed. At the moment, the devs are working on fixing the issue. However, the following suggestions may help you fix the issue.

Back 4 Blood is an innovative first-person shooter game that will take you on a new thrill ride into the zombie apocalypse. Turtle Rock Studios is bringing their talent for cooperative shooters to the next generation in Back 4 Blood. The game has been recently released on 12 October, 2021, for Xbox Series X and Series S, PlayStation 4, Xbox One, PlayStation 5, Microsoft Windows.

Back 4 Blood will follow in the footsteps of its predecessors Left 4 Dead 2 and will feature similar gameplay with new mechanics, such as the card system. The card system makes the Back 4 Blood gameplay more flexible, allowing players to personalize their characters and create the best combination of abilities.

As part of the new system, there will be a more dynamic effect on the matches and missions available within the game. At the beginning of each match, players will have access to cards. Each player can build their own deck using the cards. The ability to customize matches is a key feature of the game. Players have the ability to adjust their matches and playstyle with cards. Players can improve upon their gaming strategies and skills depending on the cards they use.

Like the Left 4 Dead games, Back 4 Blood also offers an expanded online multiplayer mode. Additionally, the game includes an online cooperative mode for four players as well as a PvP mode for eight players. A number of the elements that made the Left 4 Dead series so successful have been brought back to the game. In addition, there are new features to look forward to as well.