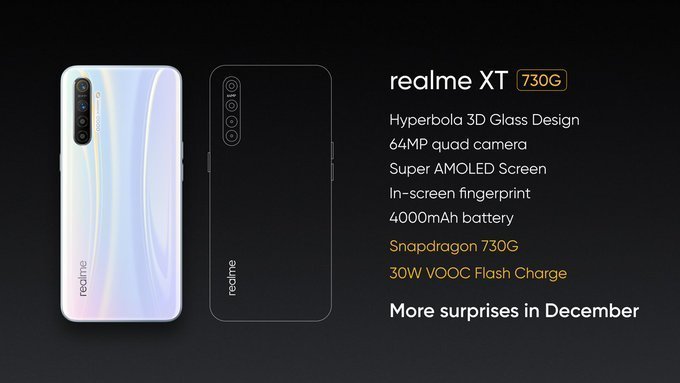 Today at the launch event of the Realme XT, Realme’s CEO Madhav Sheth announced the upgraded version phone. Realme XT 730G is the next in the list which will arrive in December this year in the Indian market

The name of the device gives us a clue that Realme XT 730G will feature Qualcomm Snapdragon 730G Octa-Core chipset with better graphics performance. The device will be for the gaming-centric audience as it has higher GPU clock speeds. The Realme XT 730G will come with a 4,000mAh battery. It will support 30W VOOC Flash Charge fast charging technology.

We are not done yet! We have more surprises coming up for you this December!
Stay tuned for realme XT 730G! pic.twitter.com/HGyJ5GQwcF

Recently, the smartphone appeared on the TENAA which reveals that XT 730G will feature a 32MP front-facing selfies camera. It is still to know whether it will a pop-up mechanism for the front camera or not.

Other specs of the phone are the same as Realme XT. The smartphone will have a 6.4-inch Full HD+ AMOLED display with protecting Corning Gorilla Glass 5. It will have up to 8 GB of RAM and 128 GB of internal storage. The will use a quad-camera module at the back of the phone same as Realme XT. It will use Samsung’s 64-megapixel ISOCELL Bright GW1 primary sensor + 8-megapixel 119-degree ultra-wide-angle lens + a 2-megapixel depth sensor, and a 2 MP macro sensor.

The shared teaser of the device with the statement “We are not done yet! We have more surprises coming up for you this December!”. Since the company did not give any information for its OS, It might possible that it will debut with RealmeOS powered by Android 10. It might be the surprise the company talking about. Well, It is just a guess. We will know the whole story in December.