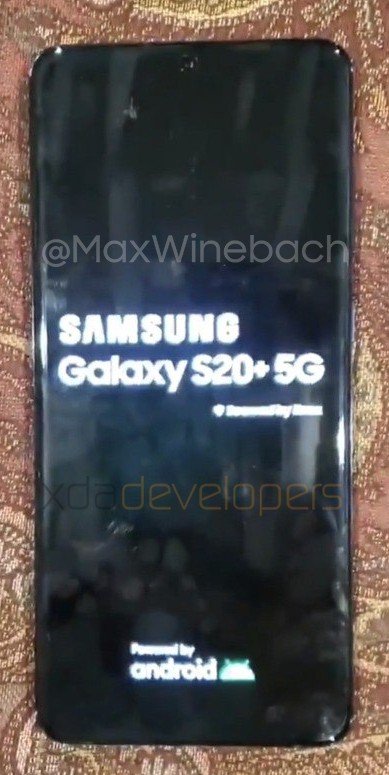 Samsung will hold an event called “Galaxy UNPACKED” on February 11th in San Francisco in which the company will unveiled its new technology and products to the world including Samsung Galaxy S20 series as well as a new clamshell foldable smartphone. It’s just a less than a month to go and there were still no real images circulating of Samsung Galaxy S20+ till the date that portrayed the devices.

Finally, here are the some genuine photographs of what will be Samsung Galaxy S20+. The source is not known for anonymity, but the reliability of the site that released them (XDADevelopers) gives us a good guarantee of reliability.

The primary detail that gets the attention is the main photographic department, which changes a lot compared to that found in the 2019 models. There will be the 4 cameras in a 3 + 1 arrangement with an LED flash. There is an another sensor that is not well defined (may be an infrared spectrometer or microphone hole?). Volume rocker and to switching on and off button is on the right side of the phone. It seems that there is no button dedicated to Bixby.

On the front, phone’s display has a very small bezels. The device is offering an Infinity-O display is much less curved than before which is very much similar to the Pixel 2 XL. The glass would seem to a 2.5D instead the usual curved glass and will come with pre-installed screen protector. The display holds the central punch-hole that was first changed on the Galaxy Note 10 lineup.

Another difference compared to 2019 is that Samsung Galaxy S20+ will not represent the top of the series. There will be a third device in the list called Galaxy S20 Ultra. The last should depend on a much progressively extraordinary photographic segment. The arrangement for the Samsung Unpacked 2020 is as of now set for February 11: inquisitive to see these new Galaxy S20?

Also Read: Galaxy Z Flip will be the next Samsung foldable smartphone