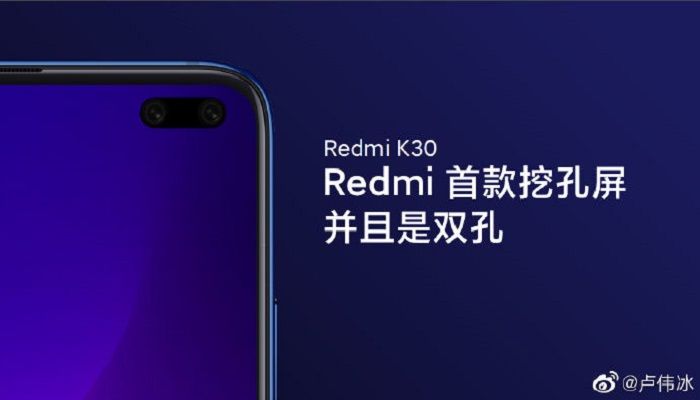 Xiaomi already confirmed that the Chinese company is working on Redmi K30 and it would be the first smartphone to have 5G integrated chipset in its Redmi series. The device will have 5G connectivity with support for SA and NSA networks. Redmi’s GM Lu Weibing said that the Redmi K30 will be the most affordable 5G smartphone in the world. But it has not revealed the launch date. Redmi recently confirmed the Redmi K30 would have features similar to the Galaxy S10 series phones. The phone will come with 5G support and punch-hole display that we have been seen in Galaxy S10 series. To recall, MediaTek already announced a 5G chipset with 5G modem built right into the chipset. The 5G chipset is built on 7nm manufacturing process with Cortex A77 cores and Mali-G77 GPU. MediaTek also has a low-end 5G SOC, which is integrated with the M70 baseband, 7nm process, and supports the SA/NSA dual-mode system. However, the architecture seems to be A76.

The Redmi K30  will be the successor of Redmi K20 Pro and will come with major upgrades compared to its predecessor. It will be the first smartphone from Xiaomi to feature a punch-hole display. The device will have two cutouts at the top right corner to accommodate dual front cameras. The rest of the details and specifications of the Redmi K30 remain scarce.

It will not be the first time that Xiaomi chooses Mediatek chipset over Qualcomm. Previously, Xiaomi co-developed Helio G90T chipset with MediaTek which was used in  Redmi Note 8 Pro. And it was quite successful in global markets. The Chinese market is making the partnership between MediaTek and Redmi even stronger. The Redmi Note 8 Pro performed very well and probably the best gaming device under Rs 15,000 right now in India. At this price segment, Xiaomi manage to add features like liquid cooling, HDR display, IP52 rating and so on to the Note 8 Pro. This might be the reason behind choosing Mediatek SoC. This will be the world’s first cheapest 5G smartphone also.

For now, as per the info, the Redmi K30 will come with 5G support and probably MediaTek high-end chipset. The phone may feature a 64MP quad-camera setup like the Redmi Note 8 Pro.

Redmi said that its first 5G phone (also the cheapest under $500) will launch in the first quarter of 2020. It’s also unclear whether the Redmi K30 will be the first to support 5G connectivity or if it will be any other Redmi device.