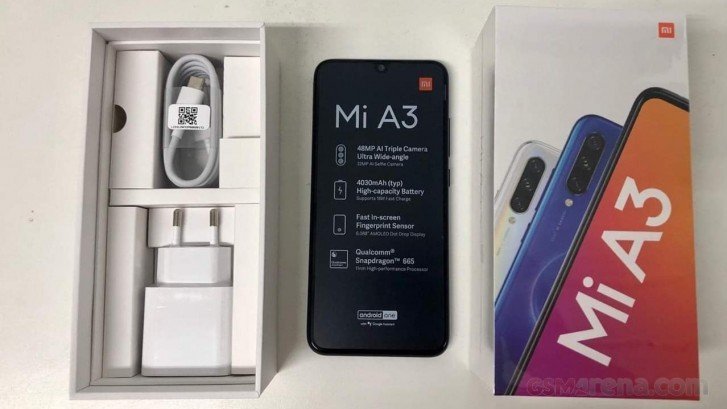 A short while ago, HD render of the Xiaomi Mi A3 leaked which shows very much about the smartphone specification. And now the live images of the Xiaomi Mi A3 retail box is also leaked on the internet which confirms the phones major specs and design.

In this leaked image of Smartphone retail box confirm that Xiaomi Mi A3 it will be available in three color variant Blue, Black, and White. It was previously claimed that Xiaomi A3 powered by Qualcomm Snapdragon 730 SoCs. But, it can clearly see that it will come with Qualcomm Snapdragon 665 SoCs as it is appearing the protective film of the smartphone. Here is the Xiaomi A3’s confirmed full specification, as of now.

This smartphone is powered by Snapdragon 665 SoC Octa Core CPU which comes with an Adreno 610 GPU. Also, the smartphone comes under the Android one program that will ensure that it will get at least two major Android update along with Security patches for 3 years.

It is not confirmed yet About the Ram and the storage of the various variant.

Camera and Display and Design: –

The smartphone has a triple camera setup. The main rear shooter of the phone is 48MP camera align vertically in the upper left corner and a 32MP camera for selfie purpose at the front.

It has a 6.08 inches FHD+ AMOLED display with a notch at the top. It is also provided with under display fingerprint scanner. This phone will be available in three color variant of Blue, Black, and White.

Battery And Other Features: –

As we can see, 4,030 mAh battery that also supports 18-watt fast charging. And USB C type cable also has given in the retail box.

It is not confirmed officially yet. But as per the leaks, it is claimed that Xiaomi Mi A3 will officially launch on 23rd of July. After the launch, it will go on sell shortly.