It's clear that each class has a specific role and brings something different to the table. But which characters are the best? That's where our Diablo Immortal Class Tier List comes in. 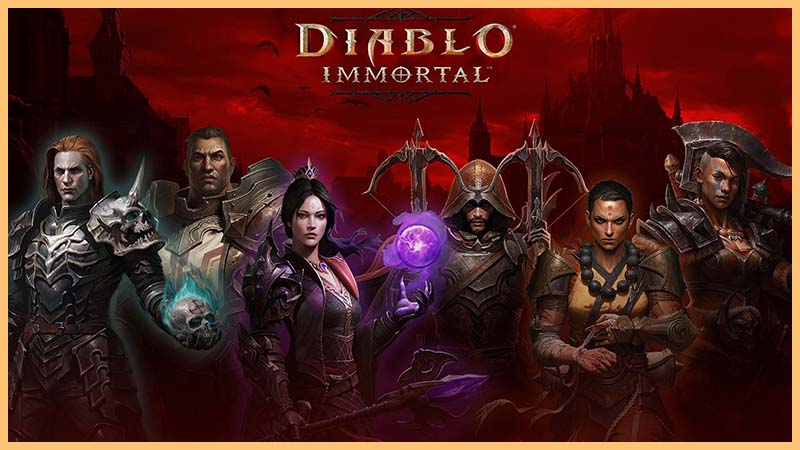 For many of us, Diablo remains one of the greatest hack and slash games ever made. In terms of pure visceral gameplay and immense re-playability, it is hard to beat. There have been several iterations since the original release in 1997, each featuring tweaks and improvements to make the game even more enjoyable. And now Diablo Immortal was recently released on Android, iOS and Windows 10 (the latest iteration!). It takes place between the events of Diablo II and III, and is designed primarily for mobile devices. So, when all these factors are considered, here is a list of the classes and their abilities in this newly released Diablo Immortal. This guide will help you decide which class is best for you!

Diablo Immortal has a different approach being a mobile game. Every class can do everything, but some classes are better than others in specific types of gameplay elements like taking down boss, beginning good in PVP, farming, etc. So what we are trying to say is that none of them are bad in the game. So we can’t go with the use S to F Tier style list for them. And as the game is fairly new, there might be changes to this tier list with new patches just like previous Diablo games. So I will try to compress all factors for this tier list, and then tell you why they are ranked so. With that out of the way, here are the best classes in our Diablo Immortal Class Tier List:

The wizard is a great class for Diablo Immortal. It’s a high DPS class with some utility and crowd control. There are two skill trees: Sorceress and Necromancer. The Necromancer skill tree focuses on damage dealing, while the Sorceress has more crowd control spells and utilities.

The Wizard is great for solo play as well as group play thanks to its flexibility in different situations – you can use it to do damage or help your team by controlling mobs of enemies! The Sorcery tree grants you access to powerful AoE attacks like Arcane Orb that deal massive amounts of damage to multiple targets at once – perfect for taking out groups of monsters quickly!

If you’re looking for an easy-to-use class that has good DPS output but still has utility abilities like knockbacks or stuns then look no further than this awesome mage!

The Crusader is a well-rounded class, starting with very powerful melee attacks and defensive abilities. Crusader is a solid choice for those who want to play a tanky, supportive class. Crusaders have high DPS and survivability, making them ideal for soloing enemies. They also have some of the best group utility in the game, with powerful healing abilities that can be used on themselves or allies alike. But where Crusaders truly shine is in their group utility: their finishers are powerful self-healing abilities that allow you to heal up after taking damage in combat (and they look pretty cool too). This class is gonna be super good for both PvE and PvP. So if you’re looking for an adaptable class with strong solo ability and good group utility, choose Crusader!

The Demon Hunter is a ranged class, so it’s best suited to players who like to be on the outskirts of combat, peppering enemies with attacks from afar. It has the highest single target damage of any class. The Demon Hunter’s abilities also make it ideal for solo players—it has fast, high-damage attacks that can get you out of a sticky situation when things get too heated. With crowd control, survivability and utility all very strong in this class you can’t go wrong with choosing them as your main hero! Put together your best set of gear, slap on a Windforce and you’ll be killing bosses like there’s no tomorrow!

The Necromancer is a powerful class that is great at controlling the battlefield and keeping enemies at bay with powerful burst damage. They can also summon minions to fight for them, which is an excellent way to deal with large groups of enemies. The Necromancer is a good choice for players who like playing as support characters, since they have many abilities that can help their teammates survive.

Barbarians are a good beginner class for anyone who’s new to the series, but they’re also a great choice for experienced players.

The Barbarian is a melee class and one of the most versatile classes in Diablo Immortal. It has high DPS, is great at crowd control, and can dish out some pretty good damage. The downside to this class is that it doesn’t have any real long range attacks, so it can be hard to hit enemies who are far away. If you’re looking for a class that’s easy to play but still has a lot of depth, then the Barbarian is the one for you.

They have a lot of defensive abilities and is great at drawing enemy attacks away from other classes. Its main damage ability is Charge, which allows the barbarian to rush at their enemies and stun them for a few seconds.

If you are looking for a class that is easy to play, then Monk is the one for you. The monk is one of the most balanced classes in Diablo Immortal.

The Monk is a character that specializes in magical attacks, armor penetration, and accuracy when it comes to enemy movement. However, this character is not without its weaknesses. If the demons start moving around too much, the Monk will have trouble dealing with them.

The issue most people have with Monks is the slow build. I tried various combinations, but nothing felt as strong as the Demon Hunter. But while the Demon Hunter focuses on single targets, Monks are really good at giving a lot of damage to various targets at once.

We hope our guide has helped you decide which class to play in Diablo Immortal, and that our tier list will be helpful as you journey through the game. We know it can be a challenge to find the perfect class for your style of playing, but we’re confident that if you use this guide and follow our advice, you’ll make an informed decision. So what are you waiting for? It’s time to get out there with your friends and slay some demons!