What does bane of arthropods do in Minecraft? Know everything here 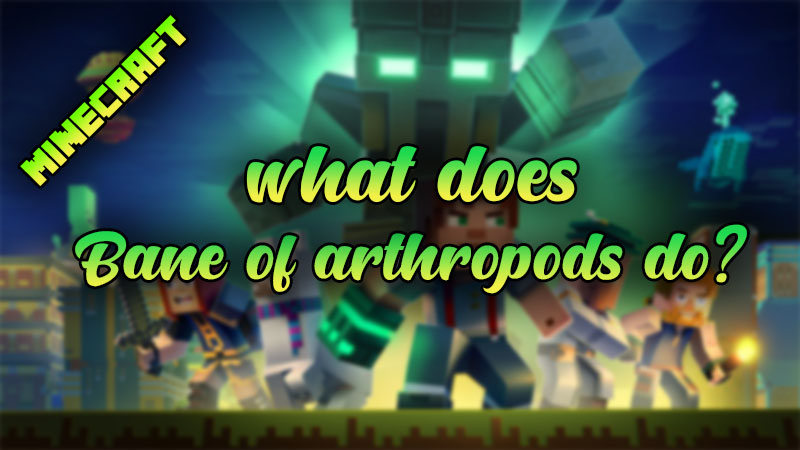 In Minecraft, one example of a damage enchant is Bane of Arthropods. The Bane of Arthropods in Minecraft is a sword and axe enchantment that enables players to excellent way to boost damage against certain mob types such as spiders, cave spiders, bees, silverfish, and endermites. It may be beneficial to you if you are experiencing difficulty taking down mobs. The same as Impaling increases your DPS, making combat much more palatable, especially if it is a harrowing encounter.

If you’re sick of Minecraft’s creepy-crawlies, you can arm yourself with the Bane of Arthropods weapon enchantment. In a Minecraft world that has this enchantment, players can use the weapon to deal massive damage to creepy mobs such as spiders and destroy any pests that may be in the environment.

What does Bane of Arthropods do in Minecraft?

A Bane of Arthropods enchantment is only useful for swords and axes. A weapon’s damage increases by 2.5 each time Bane of Arthropods is applied to it (or 1.25 hearts), but only when it fights an Arthropod mob. It applies both damage and slowness to a mob, allowing you to easily dodge or escape. This is a pretty hefty restriction, because there are so few of these types of mobs.

When encountering Arthropod mobs, Bane of Arthropods is actually a lot better than Sharpness. Because in comparison to Bane of Arthropods, Sharpness increases damage by only 1.5 per level. It is capable of inflicting damage upon spiders, cave spiders, bees, silverfish, and endermites. 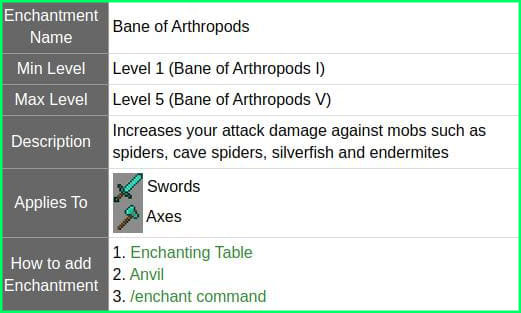 There are up to five levels of enchantments. They all deal more damage to a particular type of mob. Here is a full analysis of the damage dealt by the enchant. In addition to Slowness IV, hits to weak mobs will also result in a lowering of the movement speed. According to the level, the following types of mobs receive bonus damage such as: Spiders, Cave Spiders, Bees, Silverfish, Endermites.

The only catch is that it’s only applicable to Axes and Swords, depending on whether you’re playing in Java or Bedrock edition of the Minecraft. As well, it cannot be applied to weapons which already have Sharpness, Cleaving, or Smite. It is recommended not to use Ban of Arthropods if you do not plan on making a spider farm. However, if you want to make a spider farm, you can use Ban of Arthropods. Basicaly, if you enchant that item with it, these enchantments would degrade to incompatibility.

However, there are several ways to obtain this enchantment.

Starting with fishing, if your fishing pole has luck of the sea and lure enchantments, you’ll have a very good chance of getting enchanted books. The Ban of Arthropods may also fall into this category, so it’s always an excellent idea to try it out.

A Lapis Lazuli table and enchantible books are often better options for enchanting books. There are also other options such as looting dungeon chests, checking villages, and trading emeralds with villagers who possess the book.

Also read: What Does Smite Do in Minecraft? Take a Look Here

Bane of Arthropods: How to get it in Minecraft?

What are the steps to getting Bane of Arthropods in Minecraft? The Enchantment Table is a must for making this work. The enchantment can only be obtained by chance, as there is no set way to achieve it.

Players should keep in mind that higher level enchantments cost more experience to obtain. You will need to craft an enchanting table in order to enchant a weapon with the Bane of Arthropods enchantment. In the absence of one, players will have very limited abilities to enchant items. With 4 Obsidian, 2 Diamonds, and a Book, Minecraft players can create an enchanting table. When you get Aqua Affinity, just keep hitting the Enchantment Table. It is essential that you have all 15 Bookcases around the table in order to unlock the full range of enchants. If the players choose to place an enchanting table, they should surround it with bookshelves so that it can produce higher level of enchantments. To maintain the table path, you’ll want to make sure and have a steady supply of both XP and Lapus Lazuli on hand.

Another option is to go fishing for it. You’ll get the best results if you equip a Fishing Rod with Mending and several other enchants. You can increase the chance of finding rare drops by having both Luck of the Sea and Lure enchantments on your fishing pole. For people looking for something similar to the Aqua Affinity book, this would be a good choice. If you do this, you will likely get lots of enchant books along with the higher chances of getting Bane of Arthropods.

Is the Bane of Arthropods enchantment worth it in Minecraft?

How it can not be beneficial? 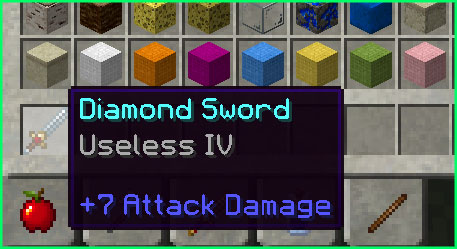 Yet spiders only have 16 health points, which makes them the most healthy arthropod mob in the game. Finding honeybees, silverfish, cave spiders, and endermites is not easy. Not helpful against spiders, because they are easy to kill without enchantments. In addition, you cannot add enchantments such as sharpness or smite when you add Bane of Arthropod. In other words, Bane of Arthropod is all for nothing.

How it can not be beneficial?

Yes. Only if you happen to be stuck in a cave spider-infested mineshaft. This type of enemy can easily defeat the player if not killed quickly enough. That’s why Bane of Arthropods is such a great tool. In case you explore a mineshaft, you should equip one of these and keep it separate from your sword that is used to cut nets because you will wear out your sword quickly. Those can also be used for spider dungeons, though they are less intimidating than cave spider spawn areas. Unless you’re in one of these situations, it’s not that helpful.