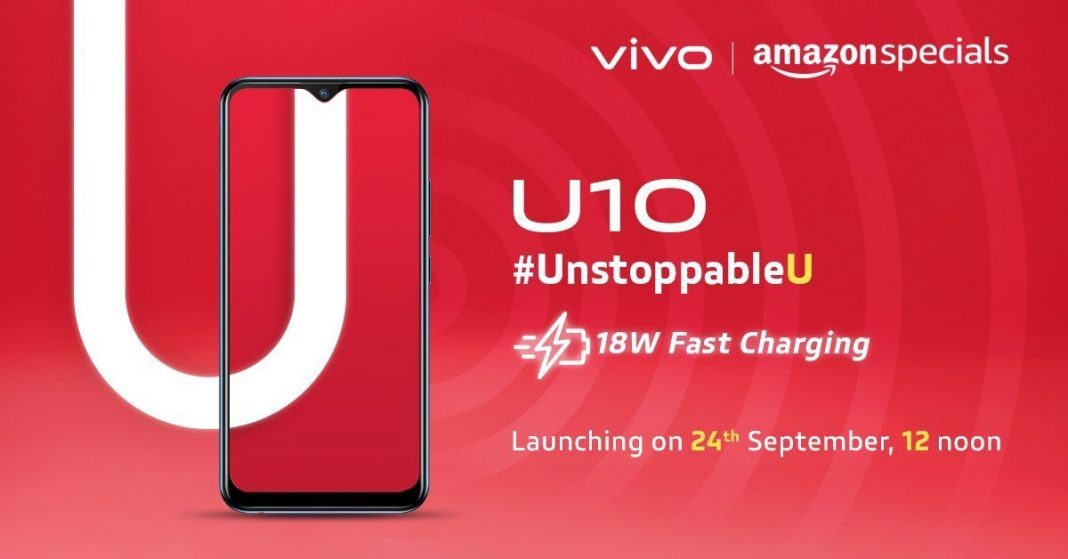 Vivo recently launched Vivo Z1 Pro and Vivo Z1X in its Z-Series while Vivo S1 is added in its S-series in India. After these three smartphones, subsidiaries of the Oppo is heading to a new launch. The company is going to introduce U-series of the smartphones by unveiling Vivo U10 this month. The smartphone will launch on 24th September and will be available to purchase via Amazon India exclusively.

While the smartphone will hit the market in the upcoming two weeks, the hand on images the Vivo U10 surfaced online. The Amazon India listing clearly suggests that the phone will come with 18W fast charging support. It has claimed that it will offer 4.5 hours of battery usage only in 10 minutes of charging.

Vivo U10 will be powered by Qualcomm Snapdragon processor but which variant still a mystery. In the leak images which is shared by 91mobiles, we can clearly see a waterdrop notch on the front panel of the display. Company’s official teaser poster also confirmed a waterdrop notch on top of the display. This leaked blue version of the phone has volume rocker keys and the power button is on the right side.

Vivo U10 will be for the segment of the smartphone market. The price range of the phone may is still to be confirm officially but it is expected to come under ₹12,000 (~$167). The phone will only be for the online audience. It will be sold via Amazon India from 24th September.