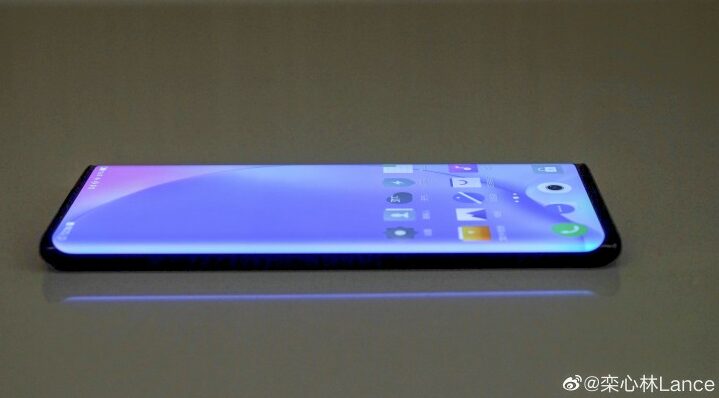 As from the earlier posts, we know that upcoming flagship smartphone Vivo Nex 3 will retain 3.5mm jack and comes with 5G supports. A Few days back, Li Xiang, he has also confirmed through design sketch of the upcoming Vivo NEX 3 that the phone will feature with a “waterfall screen”. This smartphone will come with 4G/5G dual network as well as NFC support.

Now, Vivo Nex Product Manager Li Xiang shared a teaser of the company’s upcoming experimental smartphone Chinese social platform Weibo. In his recent post, he shared the actual image of the smartphone and type a quote by world-famous architect Anthony Gaudi…”The line belongs to human beings and the curve belongs to God”. This post describes the extreme curvature of the Nex 3 display. The display is curved on the left and the right side which offer a bezel-less design.

However, it is not as curvy as it was shown in recent renders. Bezels are still present on the top and bottom of the display. So, it might be possible that the phone will not come with a 100% screen to body ratio. There is no notch on the display which suggests that the phone either adopt In-Display Camera Technology or may use a pop-up front-facing camera. “Window Effect” issue has been solved as the reports suggest.

It is expected that the smartphone Might come with newly launched Qualcomm SD855+ processor. The Vivo NEX 3 also has a triple rear camera setup. The primary sensor is a 12MP shooter. Other two sensors are as 2MP night vision camera and a TOF sensor. Moreover, the device will also ship with a 44W charger but it is not officially confirmed.