Samsung launched its Galaxy Tab S6 flagship tablet last year in August. It is said that Samsung is dealing with its 5G release also. In October, the 5G release of the Samsung Galaxy Tab S6 had gotten certification from Bluetooth SIG and Wi-Fi Alliance which confirmed that the device has a model number of SM-T866N. A few weeks ago, Samsung Galaxy Tab S6 5G was officially listed on the company’s support page along with some other tablets, indicated a sooner release. By and by, the latest report guarantees that the 5G adaptation of this device on a very basic level identical to the 4G variant.

According to the latest information, the Samsung Galaxy Tab S6 5G tablet will come with a comes with a 10.5-inch Super AMOLED panel. There is no information about its resolution yet. Leaked details shows a mountain grey color variant of the device and product dimension will be 244.5 x 159.5 x 5.7mm. 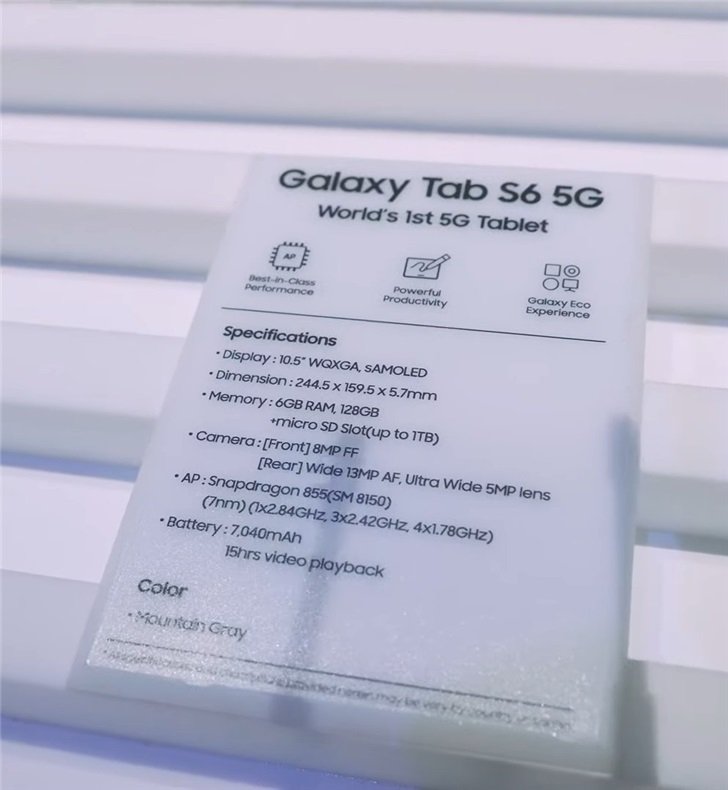 Hardware specs of the this model shows a Qualcomm Snapdragon 855 processor under the hood. The device will come with 6GB of RAM and 128GB storage space. It can be expandable up to 1TB via a Micro SD card.  It has dual rear cameras module on the back as – 13MP + 5MP. On the front, the device uses a 8MP shooter. The Samsung Galaxy Tab S6 5G will use a 7040 mAh battery that can give 15 hours of video playback.

This model of Galaxy Tab will be first tablet in the world to come with 5G technology. It will firstly be available in the South Korean market in Q1 of 2020. But right now, there is no information about price and release date.