Realme 5i launched in India with Quad-Cameras & 5000mAh battery 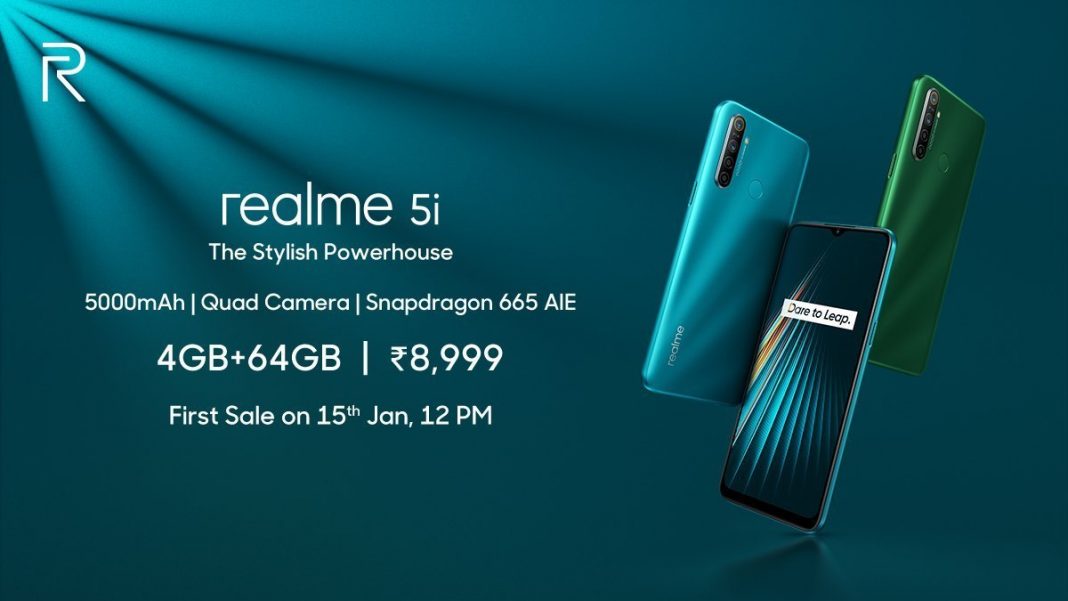 Realme launched the new device Realme 5i a few days ago, increasing its ‘Realme 5’ series in the international market. Now, today this device has officially launched in India. The device is a low budget smartphone and packed with strong battery of 5,000 mAh. Let’s see the full specifications of Realme 5i.

Looking at the front of the Realme 5i, the device comes with a bezel notch display design. To protect the screen, the company has protected this phone with Corning Gorilla Glass 3+. Apart from this, Type C charging port and speaker grill are present at the bottom of the phone. The volume and power button is given in the right side.

The company has introduced this phone with a 6.5-inch HD + minidrop notch display support with 1600 x 720 pixels resolution. At the same time, Realme 5i has launched on ColorOS 6.1 based Android 9 Pie which supports Qualcomm Snapdragon 665 chipset with octa-core processor. At the same time, Adreno 610 GPU is present in this phone for graphics.

There is a vertical four rear camera in the left side on the rear of the device and a fingerprint sensor in the middle. The 12-megapixel primary Sony IMX386 sensor with F / 1.8 aperture has been given on the back panel of the phone. In addition, this phone supports 8 megapixel ultra wide angle lens, 2 megapixel depth sensor and 2 megapixel macro lens. At the same time, Realme 5i has an 8 megapixel front camera for selfie and video calling.

This phone has a 5000mAh battery that supports 10watch charging. Its storage can be increased to 256 GB with the help of memory card. The phone has 4G LTE, Bluetooth 5.0, Wi-Fi and GPS. There is also a fingerprint sensor on the back of the phone.

Realme 5i has been launched in India in blue and green color variants. The company has launched the phone only in 4 GB RAM variants, which cost 8,999 rupees. The company will make this device available for sale on January 15 at 12 noon on Flipkart and Realme’s website. At the same time, during this event, the CEO of the company showed a glimpse of Realme’s upcoming and completely new fitness band. However, not much information was given this time.