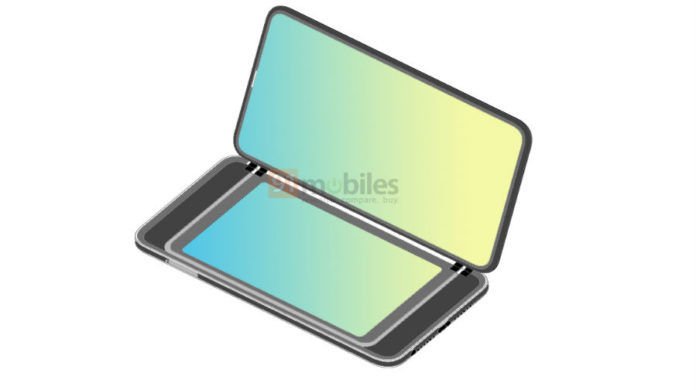 In the year 2018, China’s smartphone manufacturer Oppo filed a patent which has now received approval. The design has been revealed by this patent. The dual-screen design revealed in the patent, might remind some of you of Nokia Communicator. It is expected that the Oppo new phone will be introduced with a Bezel equipped display.

If we talk about existing brands right now, everyone is in the race to introduce foldable phones. It is expected that in the coming time the company will try to introduce its foldable phones. Talking about the design, the device will come with a foldable screen as seen in the laptop. If you talk about the placement of the volume button and the power button, then it will be in the bottom of the handset. When it is folded, it will move to the right side of the phone. In the closed position, the displays seem to rest on top of each other, similar to what Galaxy Fold looks like in the folded state.

Apart from the camera position, no other type of information has been revealed in the picture. Apart from this, you may have to wait for the specifications of the phone and other information now. At the same time, the company offers this device inside its own series, it also has to be seen.

Recently an Oppo new patent was spotted. The image that appeared in this patent was seen in the pop-up camera side. Apart from this, information was not revealed towards this phone. However, it is expected that this device can be introduced inside the Find X series.

Oppo Vice President Brian Shen teased this upcoming smartphone through Weibo Post. Please tell that Brian Shane is also the President of Oppo Global Marketing. Brian wrote ‘Happy New Year’ on Weibo wishing the new year. Brian has used # FindX2 in this post. Which has made it clear that now the work on the new phones of the OPPO Find series has started and it will be launched in the tech market with the name OPO Find X2.