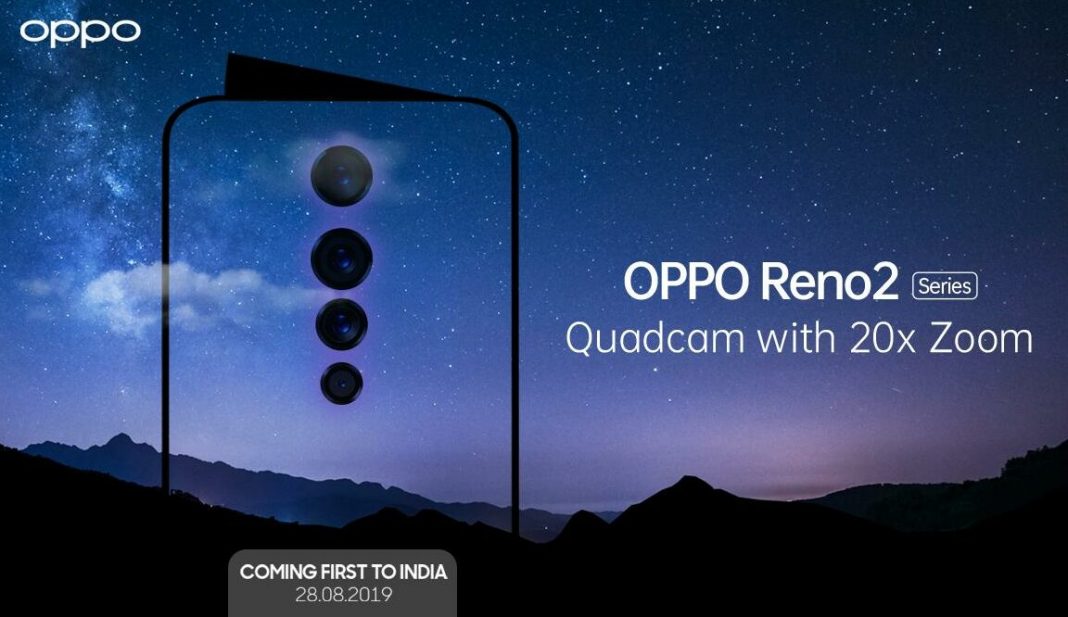 A few days ago, Oppo India officially announced the launch date of next-generation Oppo Reno 2 series.  Recently, it confirmed that Oppo India will be holding an event on August 28th, 2019 in India to unfold the OPPO Reno 2 series of smartphones. According to the reports, Oppo will launch around five to six new phones before Diwali (end of October) including OPPO Reno 2, Reno 2Z and Reno ZF. These three smartphones will launch on upcoming 28th August.  As the leaks indicate that these phones will come with quad rear cameras setup with 20X zoom for Reno 2, there is also a piece of leaked information about specifications and pricing details for other two OPPO smartphones as well.

The Reno 2 will be featuring a 6.55-inch full HD+ AMOLED display. It has a 20:9 aspect ratio with a 93.1 percent screen-to-body ratio. It has the Gorilla Glass 6 protection on the front display and Gorilla Glass 5 protection at the back of the phone. The display will also include an in-screen fingerprint reader. This smartphone is powered by Snapdragon 730G SoC which is the first handset in India to do so. The phone will come with 8 GB of RAM and 256GB internal storage.

As we discussed above this phone will include quad-camera setup at the back. The primary sensor is a 48-megapixel Sony IMX586 lens with f/1.7 aperture. The second one is a 116-degree ultrawide angle 8-megapixel lens. The third one is a 13-megapixel sensor with support for 2x optical zoom and the fourth includes a depth sensor of 2-megapixel with special portrait modes. The selfie camera of this phone is a 16-megapixel Sharkfin pop-up camera with LED flash. The 4,000mAh battery of the smartphone will support VOOC 3.0 flash charging. The price may fall under Rs. 35,000.

The display of the Reno 2Z will include a Full HD+ 6.53-inch AMOLED display with Gorilla Glass 5 protection. It will also have an in-screen fingerprint reader. The MediaTek Helio P90 processor will be powering the smartphone. And it will come with 8 GB of RAM along 256 GB of internal storage.

As per the camera department, Reno 2Z also has the quad-camera on its rear panel. The main camera of this phone is a Sony IMX586 48-megapixel lens, a 119-degree ultrawide 8-megapixel lens and a pair of 2-megapixel lenses that enable special portrait mode while snapping photos and videos. The front camera includes a 16-megapixel pop-up camera for the selfie purpose. Its will come with a 4,000mah battery that will support VOOC 3.0 flash charging. The price for the Reno 2Z will be under Rs. 25,000.

We do not have much information about this phone. However, it claimed that its quad-camera setup will include Samsung ISOCELL Bright GM1 48-megapixel lens and it will be priced under Rs. 20,000. The Reno 2F will be running on Android 9 Pie OS based on ColorOS 6.1. These phones are also expected to receive the upcoming Android 10 Q update.