Oppo A31 launched in Indonesia with a 4 GB RAM, triple rear camera and a 4230 mAh battery 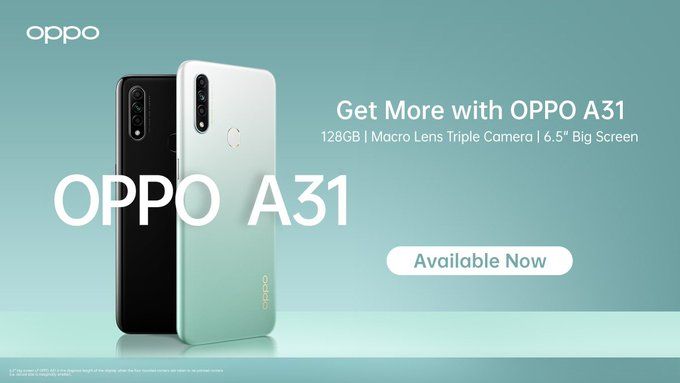 From the few weeks, it has been said that the Oppo is working on a new device that will come under its ‘A Series’. Some leaks and reports revealed that the device name would be Oppo A31. It also revealed the specifications and the design of the smartphone as well. Now finally the Oppo has officially introduced its new A31 phone in the international market, banning all such leaks. The Oppo A31 smartphone has been officially launched in Indonesia. It is a low mid-budget smartphone from the company, which supports a great look and specifications.

Talking about the specs, the phone will have a Water-drop notch display in the phone. The phone’s display is bezel less from the three sides except a slight chin that is present at the bottom part of the phone. It has a 6.5-inch large HD + display with 1600 x 720 pixel resolution and a 20: 9 aspect ratio. The Oppo A31 is loaded with Android 9 Pie out of the box. For the performance, MediaTek’s Helio P35 octa-core chipset built on 12 nm technology and clocked at 2.3 GHz will be powering the device. It comes with a 4 GB RAM on board and will support 128 GB of internal storage. You can expand it up to 512 GB via microSD card.

Similarly, for selfie and video calling, Oppo A31 supports 8 megapixel front cameras with an F/2.0 aperture. For security, while the rear fingerprint sensor has been provided on the back panel. For power backup, Oppo A31 supports a large battery of 4,230mAh.

Oppo A31 is launched in Indonesia for Rp 2,599,000 (approx Rs 13,500). In the Indonesian market, this phone will be available for sale on online shopping sites as well as offline retail stores.

It is worth noting that Oppo A31 has also been listed on the Indian certification site NBTC. It indicates that this device will be launched in the Indian market in the coming days.