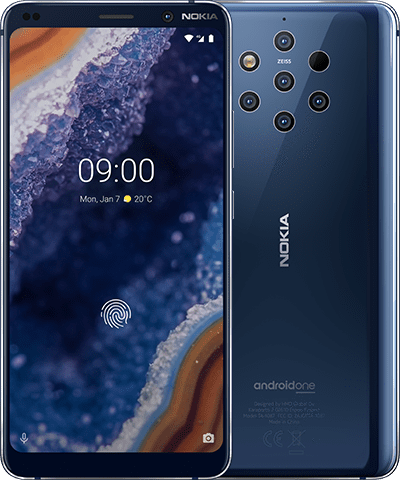 Finally, the 5-month wait is over Nokia 9 PureView has been launched in India on July 10th, 2019. Nokia 9 PureView already launched internationally in other countries in February 2019. But it takes quite a long time to launch this flagship smartphone in the country by the HMD global. This premium smartphone has a total number of 5 cameras That include 2 RGB sensors and 3 black and white camera sensors. Nokia 9 PureView will be available in India both online and offline stores. See the full Nokia 9 PureView specification below.

Nokia 9 PureView is offered by Qualcomm Snapdragon 845 Soc’s 10nm chipset. This Snapdragon 845 chipset will help the cameras during the imaging workload. This chipset has been paired with Adreno 630 GPU that will help during Heavy intense gameplay. This phone will come with Android 9.0 Pie out of the box.

Only the single color variant of Midnight Blue is available in India. This smartphone comes with 6GB of Ram and 128 GB of non-expendable internal storage.

This is the main USP of the flagship smartphone Nokia 9 PureView. This phone has a total number of 5 Rear camera setup with Zeiss optics. All camera has 12 MP f/1.8 lens. Out of this 5 camera,  2 RGB sensors and 3 black and white. These all five sensors will shoot the image simultaneously and merge these into a single high-resolution image with 10x more light. It has provided 20-megapixel front-facing Shooter for selfies.

The display quality of this phone is pretty awesome. This phone features a 5.99 inches Quad HD+ POLED display. And the resolution is 1440×2960 pixels(2k) with 18.5:9 aspect ratio and an in-display fingerprint sensor.

Looking at its processor and other is specs of this phone, it has given a pretty good battery. It has 3320 mAh Li-Po non-removable battery that can support Quick Charge 3.0 (18W) USB fast charging as well as wireless fast charging of 10W (Qi) and 5W(PMA).

The other feature of this flagship smartphone includes NFC support, Wi-Fi 5, Bluetooth 5.0, Corning Gorilla Glass 5, USB 3.1 type-C port and also so there is no 3.5 mm audio jack in this Smartphone.

The price of Nokia 9 PureView is INR 49,999 in India. And currently, people can directly buy this Smartphone via Nokia official website. But it is yet to come on Flipkart. Nokia did also said that This phone will also be available on offline stores by July 17th, 2019.

Nokia also added some offers for this phone. “Use Promo code PureView to get Rs. 5K worth gift voucher + Nokia 705 Earbuds (worth Rs. 9,999 ) free with every purchase of Nokia 9 PureView”

It looks very satisfying when we look at the Nokia 9 PureView specification that the phone has five 12MP/1.8 cameras which have been claiming for awesome image quality processing speed. But it is also a fact that this phone is powered by the last generation of Snapdragon 845 chipset. Having a P-OLED display panel that supports HDR 10 I will make this phone A Remarkable one.

Seeing the specs of This phone will make people buy. But the price of this phone can play a major role to think some other options.