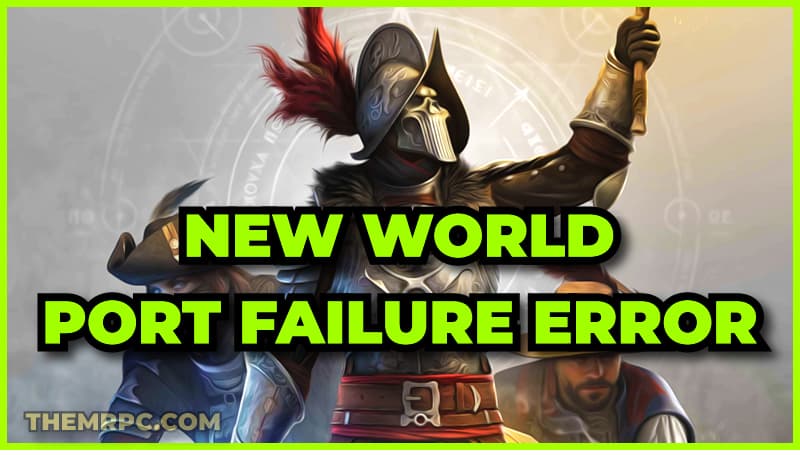 Are you one of those who are trying to play New World with the friend but when you try to connect using voice chat but could not. A lot of players are currently experiencing an error in the game when using voice chat, this issue is known as Port Failure Error. Many players have followed everything on the support site, but it still doesn’t help. It’s really annoying.. right! So, look at this article for know more about the “Port Error” issue and possible fixes for this.:

Currently, there is no official fix for this issue, but that doesn’t mean that nothing can be done. The Developers team are aware of this frustrating issue, but have yet to announce an official fix. There are a few solutions that have been suggested by various players. We have put together a list of solutions and workarounds for this issue. If you are looking for a workaround to help ease the pain of this “Port Error” issue, find out about some options below.

New World is a brand new game that sets the bar for MMORPGs. It offers an immersive story with amazing graphics that makes you feel like you’re really in New World.  Released on September 28, 2021, its release date previously scheduled for May 2020 and August 2021. New World is an online role-playing game set in the mid-seventeenth century. It’s notable for its fascinating historical setting, which is based on the Americas before it was colonized.

There are three factions in the game: Marauders, Syndicate, or Covenant. Players can join a group of up to five people, use node resources, craft items, gain control over settlements, quest, explore the world, or fight monsters.

There is no auto-locking targeting in the gameplay, so the player must keep a steady hand when aiming. With each level, the hostile mobs attack with increasingly complex and strong sequences with attacking behaviors that require the player to counter using their mana, stamina, and health. The player must do timed attacks, dodges, weapon blocks, retreats or crawl stealthily. You may choose from the following weapon skill trees: bow, hammer, hatchet, fire staff, life staff, musket, spear, sword/shield, and ice gauntlet.

Leveling up personal attribute skills is part of the character’s journey. A skill level’s returns contract as it gets higher. Characters can also upgrade their weapons and trade skills. Choose from among three basic tradeskills: Crafting, refining, and gathering.

Crafting tradeskills allow you to craft finished goods from raw materials like weaponsmithing, armoring, engineering, jewelcrafting, arcana, cooking, and furnishing. Refining tradeskills take those same raw materials and process them into more advanced products such as smelting, woodworking, leatherworking, weaving, and stonecutting. Gathering tradeskills allow you to collect non-crafted items such as logging, mining, harvesting, and tracking and skinning. In addition, there is the “camping” skill (wilderness survival).

For any updates on a fix for the error, keep checking themrpc.com.