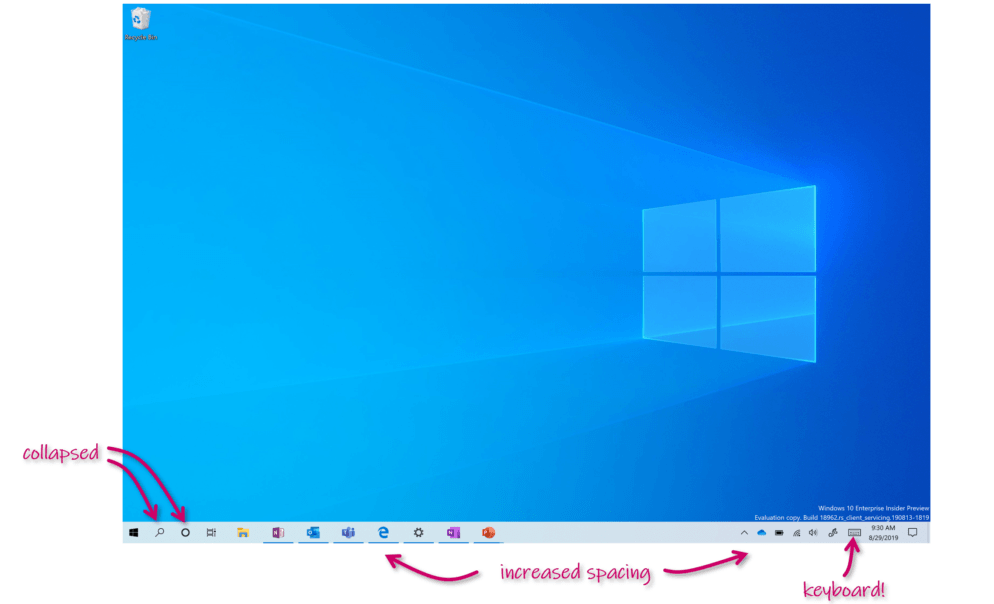 Today, Microsoft has introduced a new Windows 10 preview in which new interface has been implemented for the tablets. The releases Windows 10 from build 18965 (made available to testers on August 21) to build 18970. These builds are from the 20H1 branch, which represents the Windows 10 update that will arrive in the first half of next year.

This build provides an experience like 2-in-1 convertible PCs. Currently, the tablet interface automatically switches to its tablets touch screen interface when the detach the keyboard dock from Surface Pro. The new implementation gives a desktop-like experience.

Certain changes in the taskbar area are also made. The new interface includes the taskbar and the Start menu while retaining some elements for touch screens. The Spacing between Taskbar icons increases, the search box collapses into an icon, File Explorer switches to touch-optimized layout, and touch keyboard auto-invokes when you tap text fields. There are also a few small changes to the tablet section in Settings. There is more manual control provided to the users to download Windows or use local reinstall. Until now, Reset this PC was only able to do a local reinstall from existing Windows files. The cloud download option will reinstall the same build, version, and edition that is currently installed.

The icon of Cortana is shifted to the right side. Microsoft will also introduce a new version of the file explorer which is responsive for the touch screen.

Finally, the firm has not removed the old version of the interface for tablets. Those who wish will still be able to activate it for an unchanged experience. But this is the new mode that will be proposed by default. These changes are on the Windows 10 update of April 2020.