Huawei Will Release Kirin A1 Chipset in India On November 14th 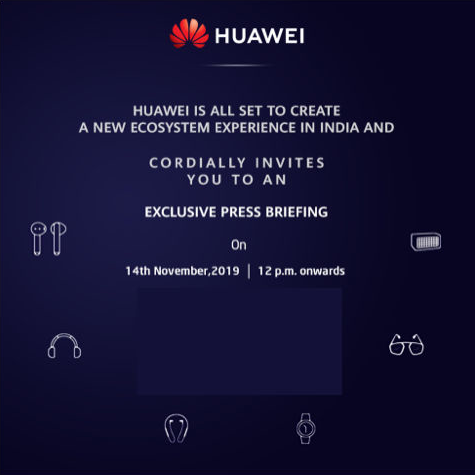 The press briefing poster reveals that there is the range of products that would be launched at the conference. Apart from the Kirin A1, there would be more product such as a smartwatch, wireless earbuds, smart glasses and more. Huawei recently unveiled its Kirin A1 chipset for wearable devices which is used in Huawei Watch GT 2 and HUAWEI FreeBuds 3. It was announced back in September at IFA 2019 in Berlin, Germany. The chipset is said to be the rival of  Apple’s H1 processor, which is used in Apple’s AirPods. Huawei claims that Kirin A1 has 50 percent lower power consumption than Apple’s AirPods and 95 percent of the package size of AirPods H1 wireless chips. The chip is smaller than Apple’s flagship H1 chip, with 30 percent higher performance. Kirin A1 is the world’s first chipset which obtains Bluetooth 5.1 and Bluetooth low-power 5.1 (Bluetooth LE 5.1) standerd certification. It will help in ultra-high-speed Bluetooth data transmission, with an efficient and stable connection performance and excellent signal anti-interference ability. That could be a reason Kirin A1 will be used on wearable devices that require Bluetooth support. It also offers low latency and ultra high-definition audio output, among other things.

Apart from Kirin A1, Huawei Watch GT 2, Huawei FreeBuds 3 and some other wireless products are also closely followed. These products will make an entry in the Indian market at the end of this month. It is worth noting that the posters are also printed with Bluetooth wireless headsets, glasses, and other icons.