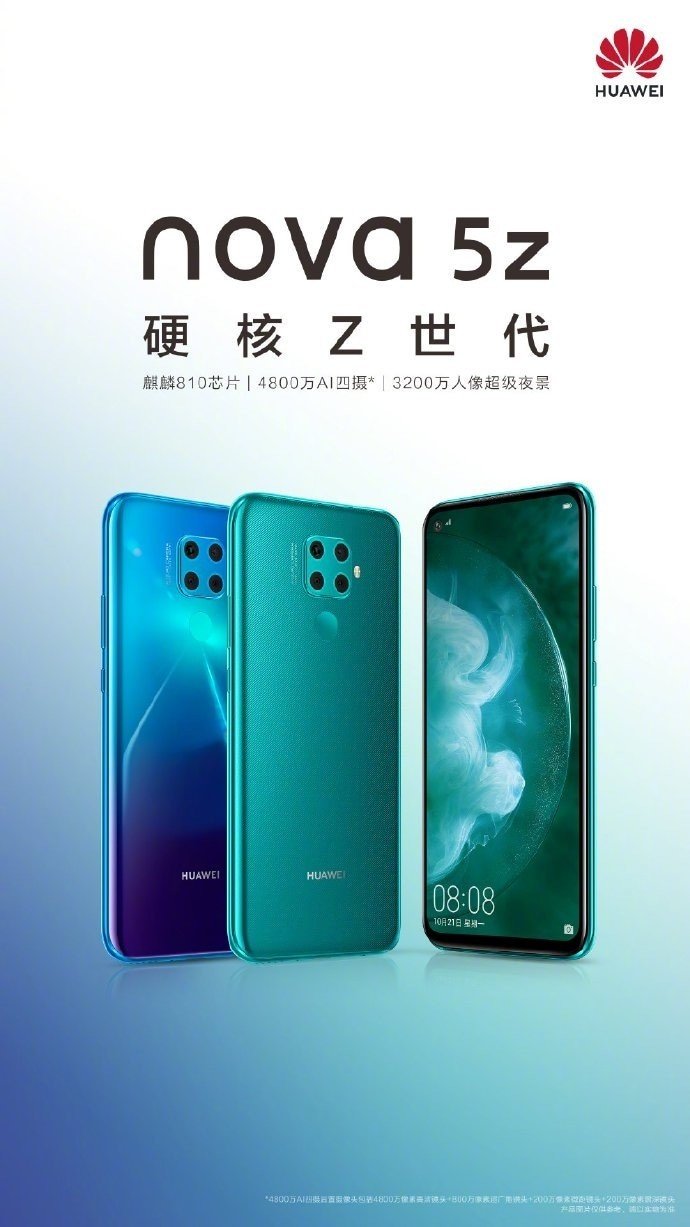 A few months back, Huawei introduced its Nova 5 series which included 5 smartphones Nova 5, Nova 5 Pro, Nova 5i, Nova 5i Pro, and Nova 5T. It seems that the Chinese firm has more stuff to introduce yet. Huawei teases its sixth smartphone under its Nova 5 series as Nova 5Z on its official Weibo account.

The teased images of Nova 5Z look very much similar to Nova 5i Pro and one would easily mistake as it has the same design. Looking at its specifications, it also seems very much identical to its previous Nova 5i Pro.

In the teaser poster, we can see a punch-hole display design with a very thin bezel at the corners. However, the bottom bezel of the display is slightly thicker than the other sides of display. The poster reveals the key specifications of the smartphone. It shows Kirin 810 chipset will power that Nova 5Z which works on 7nm process. This is the successor to Kirin 710 chipset.

The phone will have a 48MP primary sensor + 8MP ultrawide, 2MP macro, and 2MP depth sensor modules for the rear and a 32MP sensor with a night mode for the selfies. The processor and the camera specs of this Nova 5Z are very much similar to Nova 5i Pro. So, it is very interesting to see on which factor the Chinese company will differentiate Nova 5Z to Nova 5i Pro.

It has the fingerprint sensor right underneath the quad-camera setup of the device. It situates the LED flash beside the square quad-camera design. The phone will be available in two variants –  green and aurora.

According to the reports, Huawei might launch another smartphone as well along with Nova 5z as a Huawei phone with model number AQM-AL00 is recently surfaced on TEENA. This phone has an OLED display, triple rear cameras, and a 4000mAh battery. Rumors suggest it could be Huawei P Smart 2020.

Huawei teases the poster of this smartphone but the exact launch date of the phone is still unknown.