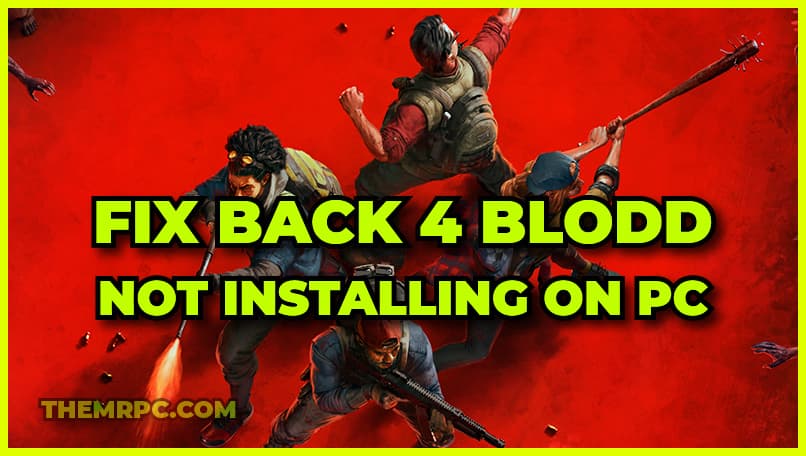 There is a problem with not being able to install Back 4 Blood on your windows PC with Game Pass and the Xbox App. It’s happening with multiple people and some on reddit have confirmed it as well. Players are reporting that Back 4 Blood is not installing on their PC even though they have a valid Xbox Game Pass subscription. So if you’re a Xbox Game Pass member and having trouble installing Back 4 Blood on PC, then please follow the below guide to fix this.

Back 4 Blood is a first-person shooter video game released by Ubisoft. However, numerous users have been having a hard time running/installing the game on their PC along with the Game Pass and Xbox App. There are several methods that have been demonstrated to resolve the Back 4 Blood Not Installing With Game Pass & Xbox App on PC issue. The ways listed below are some of the most popular approaches that have been employed effectively by other players who have encountered this error previously. If you’re running into this error, there are a few things you can try. Give these suggestions a shot and see if they help you get started!

If you are facing this issue after successful login into your Xbox account, then first of all check your time zone and it must be set to automatically. It’s very important to ensure your time zone is allowing you to install the game successfully. Right click on date and time area on the taskbar, click adjust time/date. and Set Time Zone Automatically.

You need to login with the same Microsoft account on your Xbox App and also in the Microsoft Store app for Windows 10 PC. Different MS account can cause issue while installing the game.

We have got another fix for you, which is also a fix for anyone having issues installing any games with the new Store & Xbox app! Try to reset your Xbox app and Microsoft store which can also be useful to fix this issue. Open Apps and Features Settings by typing “Apps” in the Windows Search Bar. Scroll down to Microsoft Store and click on its advanced options. Locate and select Reset. Reset the Xbox App in the same way. Trying updating the Xbox App from the Microsoft Store may help if you still cannot resolve this problem.

Visit this link to download Xbox Identity Provider. The first step is to uninstall the remaining gaming services by typing this command in Windows Powershell: “get-appxpackage Microsoft.GamingServices | remove-AppxPackage -allusers“. When you hit enter after typing this command, the remaining software will be uninstalled. Next, install Gaming Services by typing “start ms-windows-store://pdp/?productid=9MWPM2CQNLHN”

In the Windows Search Bar, enter “Services“. You will then need to choose the Startup Type to Automatic for each of the below-mentioned services, double click on them, and apply the settings.

9). Install The Most Recent Version Of Microsoft Windows

We have covered the specific reasons behind Back 4 Blood not installing with Xbox App and Game Pass. You can share these methods with your friends so that they won’t face this issue again.

First-person shooter video game Back 4 Blood was released by Warner Bros Interactive Entertainment and developed by Turtle Rock Studios. The game was released for Windows, PlayStation 4, PlayStation 5, Xbox One, and Xbox Series X/S on October 12, 2021.

Due to its similarities with Left 4 Dead, and since it was developed by the creators of the original game, it is considered its spiritual successor. Developed by Turtle Rock Studios, the game arrived nearly a decade after the studio split from Valve (who published both Left 4 Dead games and owns the rights to the franchise). They have since re-established themselves as an independent studio.