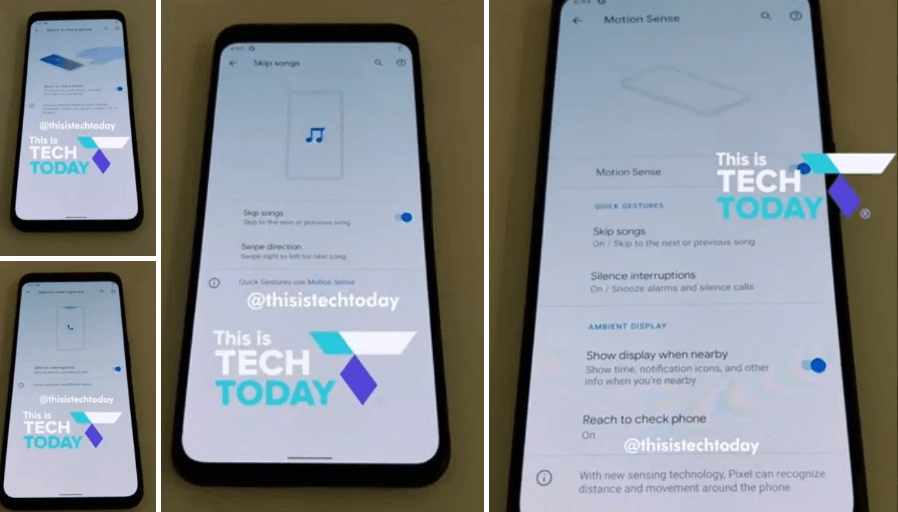 It has been a month since leaks and rumors start spreading. Back in July, Google writes a blog confirming the Google Pixel 4 smartphone will be equipped with Motion sense module called “Soli Chip”. Now, a new video has been spreading on YouTube which gives us a sneak peek of the functionality of the device that “How Soli Chip works with the Pixel 4. The video is shared by M. Brandon Lee on his YouTube channel “This is Tech Today“.

The Motion Sense unit “Soli chip” allows you to perform numerous actions like skip songs, wake the display, mute the calls, alarms, and briefly turn on the lock screen by various gestures of the hand. There are many key things this Motion Sense Unit can control. There’s also a notable feature called “Reach to check phone” that activates the mobile screen when you hover on your hand over it to display notifications, time, and other information. Some images of the settings of the motion sensor in the Pixel 4 are also shared. The video is 16:15 minutes long and you can find the leak at 13:01 minutes. However, we also came to know the Soli chip won’t be working in certain regions of the world including India and Japan because of legal certification clearances required. Whenever it will obtain the clearances, it would be functional in that region.

Considering the various rumors and leaks, Google Pixel 4 might go official on October 15th. That’s more than a month from now, but more information about it is likely to follow.