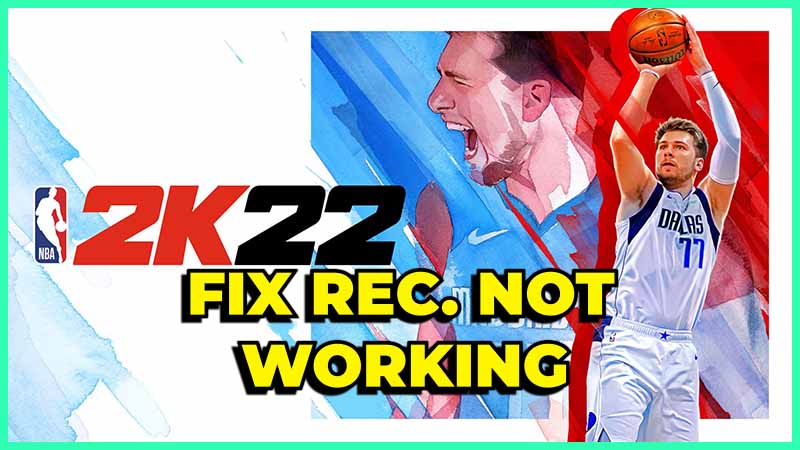 It’s great to see how the NBA 2k community has been improving over time. With countless numbers of players, many of which put in countless hours of hard work within the game itself, it is only natural that issues would arise after a while. There are a significant number of players who have encountered an error with “The Rec Mode” in the NBA 2K22. Because of this bug in NBA 2K22, many players are unable to play the “The Rec” mode at all, and it can be particularly frustrating for them. In this guide we have come up with a list of solution through which you will able to fix NBA 2K22 “The Rec” Not Working Issue.

As one of the newest and most popular features in NBA 2K22, The Rec is a game mode that simulates the experience of playing in an actual recreational basketball league. From 5-on-5 full court games to 3-on-3 half court games, The Rec offers a variety of ways to enjoy competitive basketball with friends. In addition to being a great way to stay active, The Rec also provides an opportunity to socialize and connect with other players from around the world.

How To Fix NBA 2k22 Rec Not Working

Performing a quick restart can fix a lot of issues, and so that’s the first troubleshooting step we recommend. Bad sessions can have an effect on the game, and so if you’ve been playing for a while, try restarting.

As with any modern game, NBA 2k22for example, requires a stable connection to the internet. If you’re trying to access The Rec but can’t connect, check your network connectivity first. No connection means no Rec—it’s as simple as that. That is why we always recommend that your internet connection meets the system requirements. We don’t want to assume what’s wrong with your connection, so we’ll go through some simple things you can do to make sure everything is working properly.

One of the most common reasons for weak internet connectivity is interference. Sometimes your connection may be too slow because another device in your home or in your neighborhood is using up all of the available bandwidth on your Wi-Fi channel, such as a neighbor streaming their own basketball game or TV show. If this happens, try switching to a different channel and seeing if it resolves The Rec not working issue.

To get the most out of your gaming experience, it’s important to make sure all of your game consoles are updated with the latest software. When a new patch or fix is released for your favourite game, make sure you download it as soon as possible to avoid any unnecessary bugs or errors.

So it is very important that when trying to fix the Rec not working in NBA 2K22 is make sure you have the latest version of NBA 2K22 installed on your console. As mentioned above, there were several patches released for NBA 2K22 that addressed the various issues players were encountering with the game.

If you’re having issues with the Rec feature not working in NBA 2k22, there are a few things you’ll want to try. First, make sure the game is updated to the latest version. A lot of bugs and glitches can be fixed simply by updating to the newest build of a game. Next, you’ll want to verify that your game files aren’t corrupted. To do this:

Finally, restart your computer and launch NBA 2k22 again to check if problem is resolve.

If none of the above method able to solve this issue then the best way to fix the problem is by contacting someone who can help you. You need to contact the support team of your internet connection provider, and ask if they have any known issues with NBA 2k22. You also need to contact the developer of NBA 2k22 and ask them if they have any known issues. If you are still having problems, then you should contact the support team of your router or modem.

In 2021, video game developer Visual Concepts released one of the most highly anticipated titles of the year: NBA 2K22. It is the latest game in the series to date, and has been well-received by critics. Boasting cutting-edge graphics, a huge array of in-game activities, and a stellar soundtrack, it was well worth the wait. Released on September 10th, fans swooped in to purchase the game on all major platforms — including Microsoft Windows, Nintendo Switch, PlayStation 4 and 5, Xbox One and X/S.

Some of these fixes may prove helpful with your game or recs not working. If you haven’t already then be sure to keep an eye out on the NBA 2k community. They are usually good at helping one another. This year has been a bit rocky but hopefully they will improve it immensely and make next years game more smoother and enjoyable. If you are still experiencing issues, it is worth checking out the comprehensive guide of NBA 2k22 themrpc.com for more fixes. Thank for reading. Happy gaming.