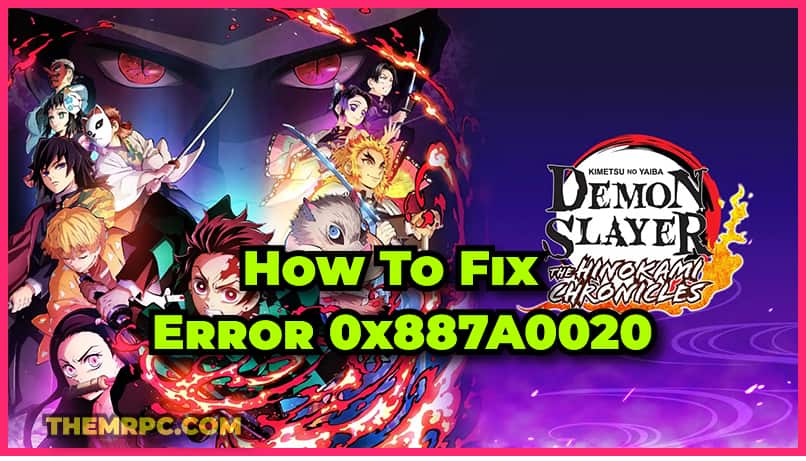 You might have guessed that Demon Slayer Kimetsu no Yaiba The Hinokami Chronicles is a video game adaptation of a popular manga and anime show, the story of which you already know. The game itself has been created by CyberConnect2, a Japanese company who is responsible for the creation of other well-known projects such as Naruto: Ultimate Ninja Storm series, Asura’s Wrath and a few others. Like many players, you’ve probably run into the issue where Demon Slayer crashes with error 0x887A0020. This Demon Slayer guide is all about fixing and possibly preventing this low level fatal error and UE crash error 0x887A0020.

Kimetsu no Yaiba: The Hinokami Chronicles is an action role-playing hack and slash video game based anime adaptation of Koyoharu Gotouge’s manga series. Kimetsu no Yaiba that follows the story elements of the 1st season of the anime. The game features single-player and multiplayer modes. It’s available on multiple platforms, such as Microsoft Windows, PlayStation 4, PlayStation 5, Xbox One, and Xbox Series X/S.

Okay, let’s look the main topic for which you are here. We are here to help you deal with the crash issue with the error code 0x887A0020 in Demon Slayer Kimetsu no Yaiba The Hinokami Chronicles.

There is an error that causes crashing in this new Demon Slayer Kimetsu no Yaiba, The Hinokami Chronicle game. Unfortunately this issue happens because of a conflict with GPU and Unreal Engine 4. Because of this, similar to other Unreal games, GPU instability can occur. Thus, the error results in a complete crash & makes the game unplayable.

You can change the GPU time by following these steps: