Deadpool Likes Chimichangas, But Why? Here Everything You Need To Know 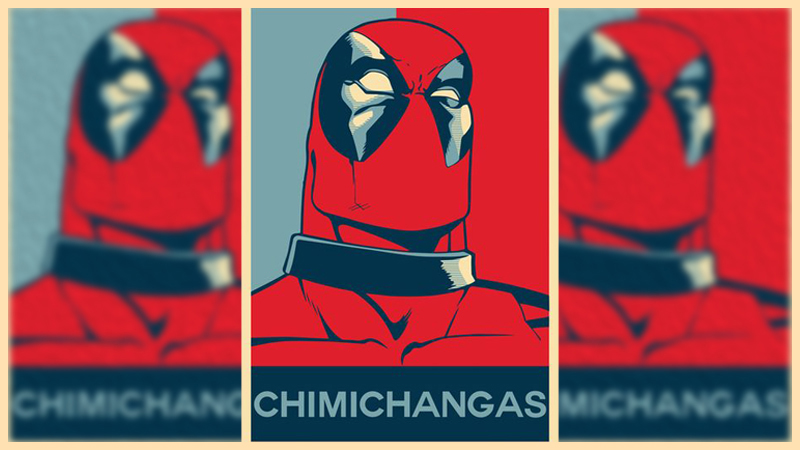 Deadpool is the ultimate example of the hero archetype. Even though he has serious mental issues, Deadpool maintains his essence as an anti-hero. It’s because of this tenuous grasp on sanity that makes this character so much fun to watch. After all, what better way to laugh than at things that don’t make any sense? Deadpool obsession with chimichangas is just one of the things that doesn’t make any sense about him. Why would someone break into a sweat just thinking about these fried treats? 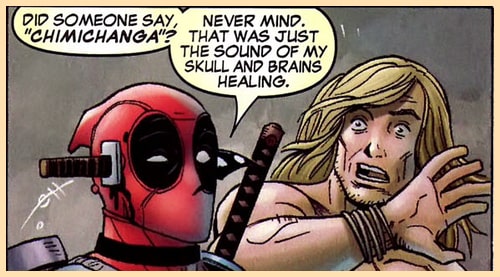 Just like all other comic book characters, he has some superpowers. But they are actually very different from any other superhero. Deadpool’s abilities are weird and unique. We are talking about healing factor, telepathy, teleportation, time travel and even more unusual ones. He is extremely durable and strong. Deadpool is famous for his special swords which there are lots of different of.

Deadpool is a super-hero with a twisted sense of humor but a heroic heart. He’s a man with a million ideas, a thousand plans, and two or three of them are good. He has a morbid way of looking at the world – the glass is half full – just over the rim! Hilarity ensues as Deadpool battles against evil forces to save lives, minister to those in need, and generally do anything that will make his life more interesting.

Throughout this article, we’re going to be exploring Deadpool’s passion for chimichangas — we’ll be looking at why he loves the food so much and if he even likes them. We’ll also be establishing exactly what a chimichanga is, as some people may never have heard of such a thing before.

Deadpool is a man of many talents, but his love for chimichangas is what makes him truly unique. However, why does Deadpool have such an insane passion for these Mexican food deep fried treats? And does he even like them!? Well, let’s find out!

What is Chimichangas in Deadpool?

The chimichanga is a Mexican and Southwestern American cuisine deep-fried dish that consists of an elongated and cylindrical piece of fried burrito-like dough, filled with a mixture of seasoned ground beef, shredded cheese and other ingredients and sauces and, optionally, wrapped in a flour tortilla. Its popularity has led to the creation of alternative embodiments — such as the Coney Island chimichanga — but its fundamental makeup remains the same: a big burrito. Sometimes they are also called chimis. 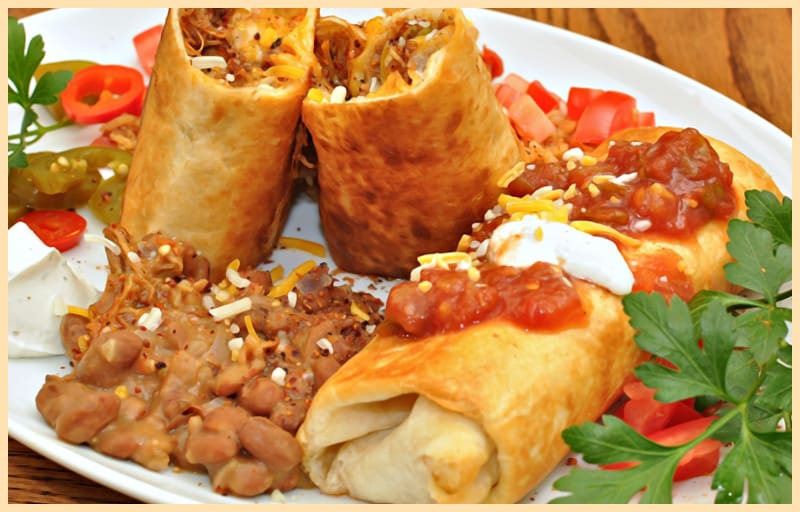 What Is The Word Chimichanga Mean?

Chimichangas: Delicious, but more often than not, not spelled correctly. For me, “chimichanga” is a funny word – it’s funny when you write it down without spaces, and even funnier when someone pronounces it incorrectly. It’s a funny word, I say with emphasis on the funny.

According to Wikipedia, the words are derived from two Mexican Spanish terms. Chamuscado means seared or singed. Changa is related to the vulgar word chingar meaning rude expression for the unexpected or a small insult.

Deadpool loves chimichangas – but not because he thinks they’re amazing. “I could go for a chimichanga right about now,” he once said in one comic, while another time he used the word because it’s fun (and funny) to say. See? That’s the real story behind the word.

For the longest time, it’s been believed that Deadpool loves chimichangas. Even though he has never had any substantial evidence of this, the movie definitely bolstered the idea, encouraging more people to believe in this misconception.

Deadpool is a “Merc with a Mouth”, so anything he says is just entertaining. He is a funny and sarcastic character, and everything he says and does is hilarious and witty. His humor comes from not taking things too seriously, or those who he is addressing for that matter. When’s the last time you saw Deadpool, a character who lies about everything, even his personal preferences. Though it may seem strange to see something Deadpool says blatantly contradicted by the actual story, it is actually an integral part of Deadpool’s character. 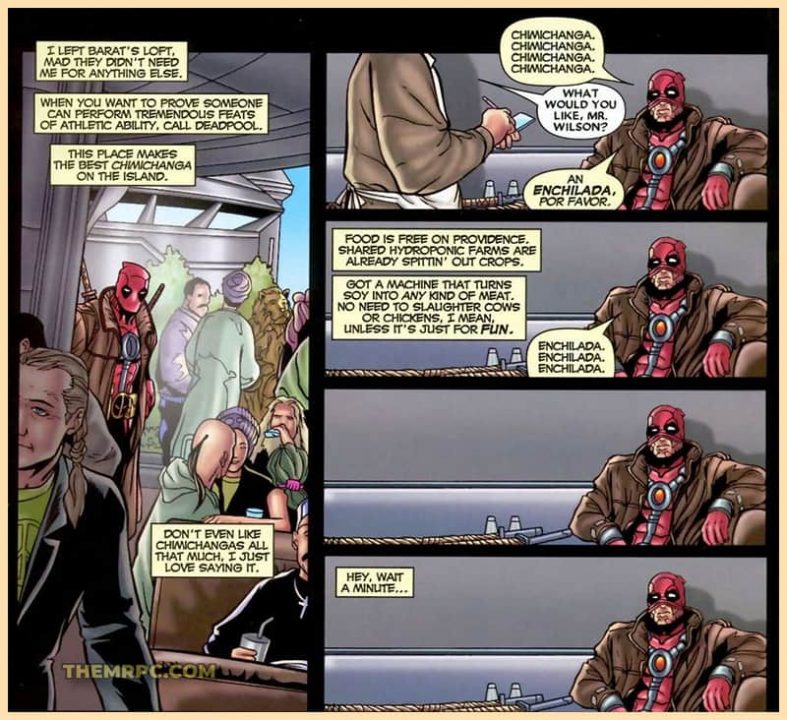 Deadpool is a master of lying. He makes up crazy stories all the time, and somehow people seem to think they’re true! Imagine that: they believe that Deadpool actually likes chimichangas. Well, guess what: those things aren’t true. Don’t believe us? Think about this: it’s been a year since the Merc with a Mouth popped up on the big screen.

Cable and Deadpool was a comic series from 2004. In issue #13 of the series, written by Fabian Nicieza, one of the creators of Deadpool, Wade Wilson himself explains how he doesn’t even like chimichangas that much — he just likes saying it.

It’s an understatement to say that Deadpool is hilarious. His comic book depicts him visiting a restaurant that makes the best chimichangas, but ordering an enchilada instead. Ironic, huh?. The carefree tone blends well with the movie.

Because of what he said in the comics, we’re confident that Deadpool has no love for chimichangas. And since there haven’t been any comics that refute his story, we’re sure of it. However, why does he keep talking about them so much? That’s where I come in.

Deadpool Is Often Use Chimichangas Word, But Why?

The Deadpool movie was filled with memes and jokes that were meant to be loved by Deadpool fans. The constantly repeated line of ‘chimichangas’ used by Deadpool was an inside joke for comic readers, who will understand the reference. Chimichangas are a favourite menu item of the merc with the mouth, but he doesn’t like them. Hence, the question must be asked: if he doesn’t like chimichanga, why does he say it over and over again?

The reason we keep on bringing up chimichangas is that Deadpool likes to say that word quite often. It is one of those words that occurs in pretty much every language, a word that has real meaning, but sounds so strange that no one understands its significance.

That’s why Deadpool frequently mentions Chimichanga. He doesn’t like them much; he doesn’t eat them all that often either, but he likes the word.

I hope this helps when someone else says that Deadpool likes chimichangas because then you will know that they are not true. Before this post I didn’t know myself that the interpretation of Deadpool’s love for chimichangas is wrong. That’s it for today, hopefully you have learned something new. If anything, remember that Deadpool does not like chimichangas. Nothing will make him happier than hearing that word now. Thanks for reading!