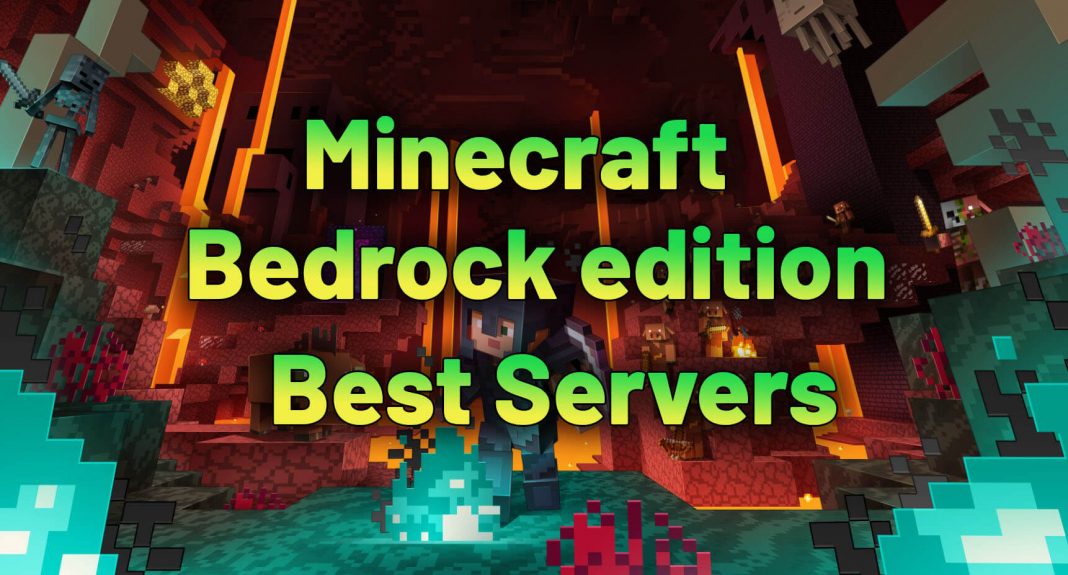 Throughout Bedrock Edition, there is a diverse range of excellent servers that have active player communities that are always open to welcome new players. These Minecraft servers are among the best that we have come across. Each of these servers offers a diverse selection of game modes and is home to a vibrant community that plays every day. Here are the best Minecraft bedrock servers. Browse through this Minecraft adventures and have fun!

Servers operated by NetherGames are among the biggest in Minecraft. Each day, NetherGames attracts more than 20,000 players, which is a testament to its popularity. There are several different types of game modes to choose from, including creative, survival, and faction modes.  Featuring games like Bedwars, Creative Plots, Duels, Factions, and Murder Mystery, this server caters to a friendly, community-driven atmosphere. Furthermore, the game offers different types of gameplay that you can experience through different modes. Among the best servers if you want several different things to play. Moreover, the server has very active forums that reward you with incentives to improve your gaming experience.

If you’re into PvP, I highly recommend checking out this server. Hyperlands offers less-know game modes as well, including Bridges and Duels in addition to its usual Skywars and Bedwars. This game aims to provide players with a unique experience. If you’re an avid PvP server player, give it a try.

Broken Lens is quite popular among the servers on this list, and it nearly always has hundreds of players at all times. In addition, Broken Lens hosts one of the largest Minecraft servers in history.  SkyWars, Survival, Spleef, and Hide And Seek are among the popular game modes available on the server. There is a good chance Broken Lens will have the best solutions for gamers who are looking for a unique game that you normally don’t find in Minecraft. Aside from offering an entirely unique gaming experience, it’s one of the best Minecraft games around.

Minecraft Bedrock Edition players always flock to FallenTech, which is mostly for mobile devices. A large number of FallenTech’s minigames and game modes draw a huge amount of player traffic, causing the server to often be overloaded. Take a trip through SkyBlock, Factions, and PvP mode. There is no better server for Pocket Edition players than this one. Along with tons of other content and an active in-game economy, the server will keep you entertained at all times.

The cosmicPE server is designed for Minecraft’s Pocket Edition. You can do a lot of customizing with this server. Compared to other servers, the server’s dedicated PvP Warzone tends to mimic a battle-royale feel and offers custom enchantments for weapon and gear. There are several game modes available, however, the program also offers some unique features to its active users.

A Faction Mode based server that has been running for years, this is one of the oldest around. Minecraft Bedrock Edition is played on the ECPE Network, with many game modes such as Factions, PvP, and Skyblock. There are a number of main features of ECPE server, including a shop, a claim system, and a large community with thousands of active players. A large number of users actively participate in events hosted by the server. As if that were not enough, there is also an in-game economy that keeps things interesting. On the server, players can also win rewards.

Minecraft official partner Mineplex attracts tens of thousands of visitors per day. Skywars, Speed Builders, and Block Hunt are among the classic and original mini-games available here. Check out the official website for updates on the Bedrock version of the server, which originally started out as Java.

The Bedrock Edition of this server is relatively big. This is the perfect server for anyone who enjoys survival games. In fact, the server’s most popular and renowned server is the Skyblock server, which has some of the best new features around and is always updated, which allows players to enjoy themselves for hours on end. The visual aspect makes it quite appealing as well. There is a separate fanbase for it because of its challenging nature and features.

In this server, you can see the style of Grand Theft Auto. There is a PvP element to this game, so you can pick whether you want to be the good guy or the bad guy. In order to become the most wanted player, a player must accumulate the most deaths, since it will result in a bounty reward and their picture being displayed everywhere.

SkyBlock is the basis for LegendsMC server. It allows you to choose and create your own islands, upgrade them, customize enchantments, and mine. Moreover, the server is heavily modified, which makes it a unique Minecraft experience. PvP isn’t punished, but rewarded in LegendsMC. The server does not only offer the main game, but also a factions server, creative and survival games, and Skyblock.

Versai has a thriving community with a lot of player traffic because it is based on PvP. A free-for-all mode is also available on Versai, which features some incredible arenas. Additionally, It includes Skywars, mazes, and parkour mini-games, as well as bots for practicing your combat skills.

This article shows you how to choose the best Bedrock Edition Servers in Minecraft. Once you are here, please consider checking out some of our Minecraft guides in the linked article.

Also read: How to Perform the Skyward Strike in Legend of Zelda Skyward Sword HD