Battlefield 2042: DirectX Error DXGI_ERROR_DEVICE_REMOVED | How To Fix It? 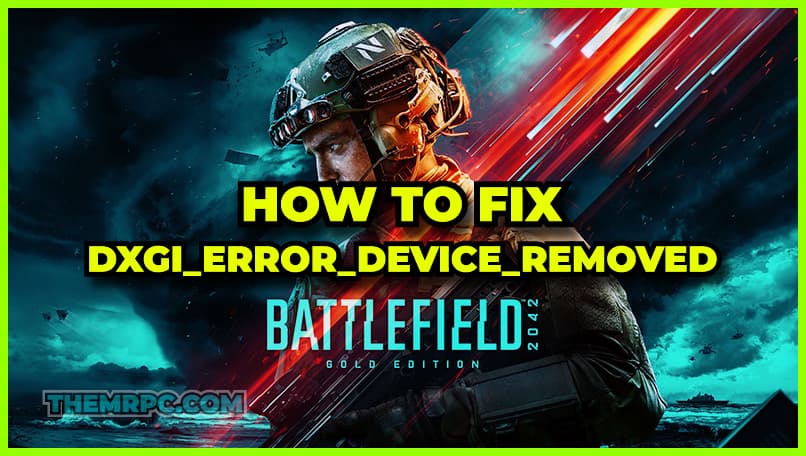 DXGI_ERROR_DEVICE_REMOVED error message is a common error that occurs when playing games. It can appear in many different games, including Battlefield, Grand Theft Auto, Crysis, and many others. Game crashes during intense firefights or on the edge of a precipice are frustrating for everyone. But DXGI_ERROR_DEVICE_REMOVED errors can make these crashes even more infuriating, as they can crop up during play, forcing gamers to reload their game and possibly even lose progress.

Battlefield 2042 is a realistic first-person shooter that provides intense action and strategy, but it does have some bugs. When seeing the “Battlefield 2042 DirectX Error DXGI_ERROR_DEVICE_REMOVED”, it usually means there is a problem with your graphics card.

This is a DirectX error that appears when your graphics card temporarily loses the connection to your hardware. This could be due to the video card being physically removed or a drive upgrade for the video card having been performed. When you experience this error, check to make sure the graphics card is properly installed and that the device driver is up-to–date.

It is the 17th installment in the Battlefield series and is set to release on November 19, 2021 for Microsoft Windows, PlayStation 4, PlayStation 5, Xbox One, Xbox Series X/S.

If you like fast, action packed games, you’ll love Battlefield 2042. The game is played with different kinds of missions and mode, and the games graphics and sounds effects are very good and give a realistic feeling to the gameplay. You can use guns, knives and grenades too as your weapons against your enemies.

BF 2042 is the first Battlefield game that has only multiplayer gameplay and cross-play between Windows PCs, Xbox One, and PlayStation 4.

Before using the guide, we would like to make clear, to operate Battlefield 2042, you need to have DirectX 12 installed on your computer. If your video card doesn’t support DirectX 12, then you won’t be able to run the game and experience the DirectX error.

If your PC is below the system requirements or if you are running an AMD Radeon R600, R700, or other graphics card on your computer that does not support DirectX 12, then BF 2042 will give you DirectX Error DXGI_ERROR_DEVICE_REMOVED when you try to launch. So, if you are experiencing problems with video lag or other system performance issues, we recommend it to update to DirectX 12.

The following solutions should be helpful to most users to continue with the game after encountering the error.

Turn Off Your Computer And Restart It

If you’re encountering the same error message every time you run a program, your operating system may be to blame. In certain cases, a simple reboot of your computer may fix this problem — simply turn off and then back on again. If that does not work, try next method in this list to fix this problem. The error may be fixed if it was caused due to incorrect initialization. So, reboot the system before solving other issues.

DirectX 12 Support Is Required For Your GPU

If you own a graphics card that doesn’t support DirectX 12, you may not be able to play the new version of Battlefield 2042. Please be aware that older GPU like 780 and Titan Black do not have DirectX 12 feature and it does not meet the game’s minimum system requirements.

This error is probably caused by a corrupt or outdated graphics card driver on your system. Make sure your system has the most recent GPU driver installed. If not, then perform a clean install by downloading the latest driver.

The GPU crash happens when the hardware accelerated GPU scheduling is in action. The DXGI_ERROR_DEVICE_REMOVED error occurs when you attempt to boost your graphics card’s performance in such a way that makes GPU unstable. The error is the result of Windows 10’s GPU scheduling program, which can cause unstable behaviour from the GPU.

You Should Reinstall Battlefield 2042

A handful of users also able to fix the DXGI_ERROR_DEVICE_REMOVED error by reinstalling Battlefield 2042. If you have a very fast internet and the download does not take a lot of time, then you can also look for reinstalling the game. However, keep in mind that this game is roughly 19 GBs.