Back 4 Blood: How To Fix “UE4-Gobi Game Is Corrupt/ Has Crashed” Fatal Error On Startup 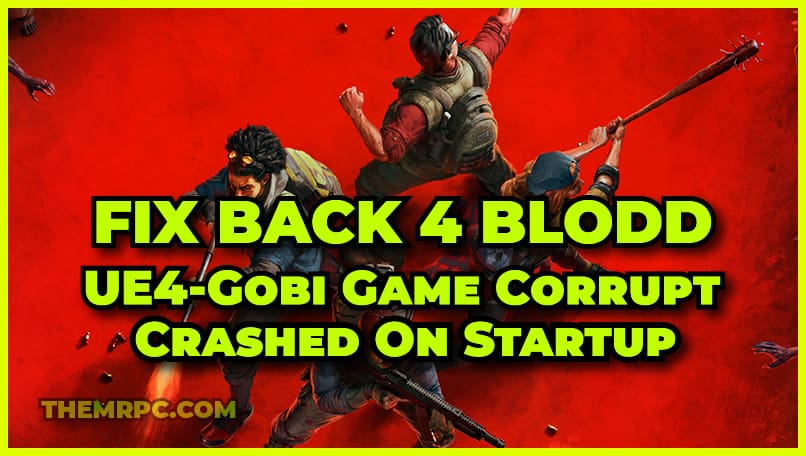 “UE4-Gobi Game is corrupt and will close or UE4-Gobi Game has Crashed” is an issue that has been happening to some people that are trying to start up their game. In case you run into the same problem, do not worry. We have the solution for you. The information in this article should enable you to fix this problem easily and quickly!

Back 4 Blood: “UE4-Gobi Game Is Corrupt/ Has Crashed” Fatal Error On Startup.

We’ve recently seen some players encountering an issue with UE4-Gobi game that prevents the game from launching. Many players have been experiencing a fatal error when trying to run the new Back 4 Blood Game. This error occurs in the form of a “UE4-Gobi Game is corrupt and will close Fatal error: [File:Unknown] [Line:258]” message. Some players have also been seeing a “UE4-Gobi Game has crashed” message.

A few comments & reports from players regarding this error are provided below:

While the exact specifics are unknown, the official dev team at Warner Bros. has acknowledged that there is indeed a problem with UE4-Gobi Game Is Corrupt/ Has Crashed that many gamers are experiencing at startup.

Thank you for your report regarding the UE4 game crash. Please note that we’re currently tracking this issue via B4B-62, if you have additional info regarding the issue you can add it there.

Thus, you can expect a solution to this issue soon.

However, as there is no official solution for this error, you can try some common troubleshooting steps to fix this issue. Checkout some important troubleshooting tips below:

First-person shooter fans have been yearning for new online multiplayer zombie games. There is no more waiting as Back 4 Blood delivers pretty much everything fans have dreamed of from a zombie-themed multiplayer game. The game is as epic as the Left 4 Dead series of zombie shooters.

The Back 4 Blood was developed by Turtle Rock Studios, the company behind Left 4 Dead. Warner Bros Interactive Entertainment published this new zombie game. There is currently an Early Access version of the game available, and the Open Beta starts on the 12th. An October 22nd release date has been confirmed. The game is available on various platforms, such as Windows, PlayStation 4, PlayStation 5, Xbox One, and Xbox Series X/S.

This is all you need to know about “UE4-Gobi Game Is Corrupt/ Has Crashed” issue. To stay up-to-date on Back 4 Blood news, stay tune to themrpc.com.