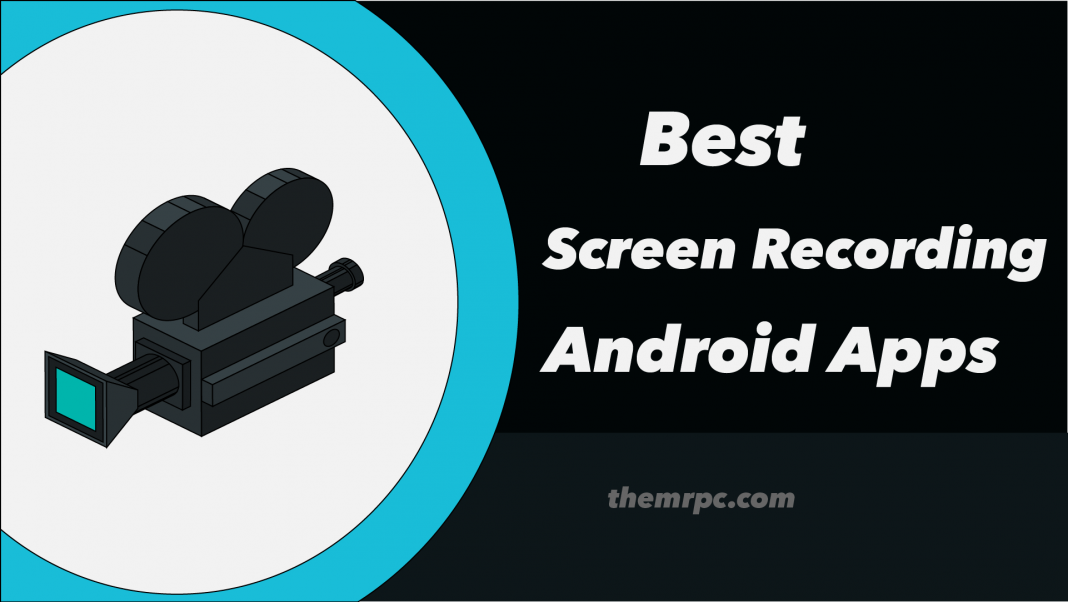 There are lots of things that you might be doing on your phone. You might be playing some cool android games, watching some important or perhaps entertaining YouTube videos, or might be scrolling some WhatsApp messages. Whatever you are doing, sometime a thought for sharing with friends always come into your mind by recording the stuffs that you are doing on the phone’s screen. But for this, some Android screen recording apps should be installed in your Android device. 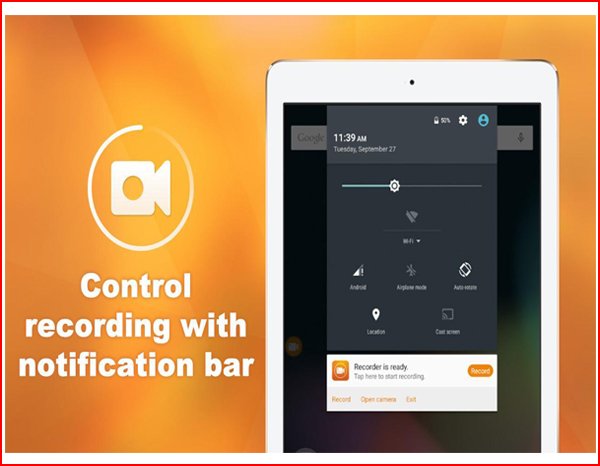 This app offers a build-in video editor that you can use to edit videos when the recording is done. Also, You do not need to have root access (as some of the apps requires) in order to to use this app root access, and there is no time limit for recording. However you will see a watermark on every video you recorded with this application. So, never mind, it is a free application.

This application comes with some of the features that makes it more interesting to use. In this application you can choose set resolutions, frame rates, bit rates, front-facing camera, shake gestures, GIF maker, etc. In DU Recorder you will get 20 different language support which makes it very handy to use in your native language.

Screen Recorder is another application in the list that let you record your mobile screen without serving any ads. The user interface of application is very simple and you just need blue button on the screen to start video recording of you phones screen. After installing the app you will see a tiny widget floating on your smartphone screen offers different settings and options. 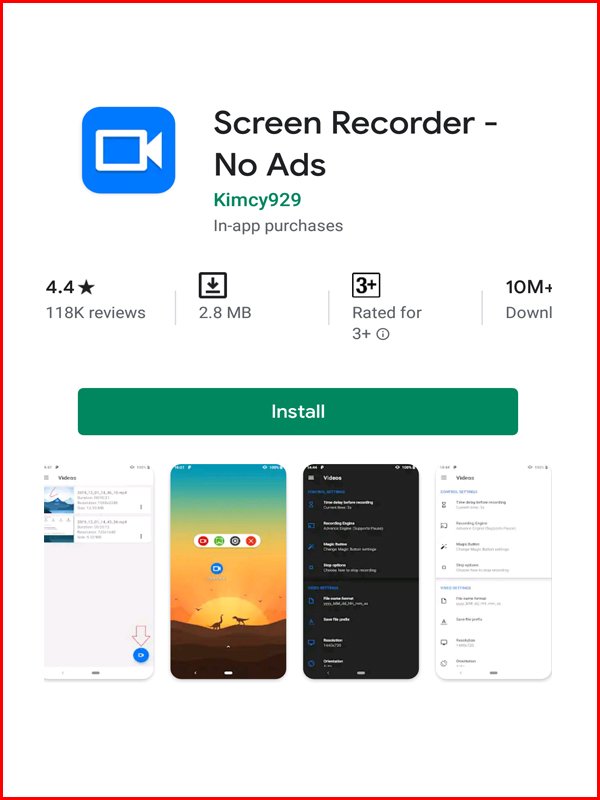 The application can record HD videos at 15-60fps with more resolution option as 240p, 360p, 480p, 540p, 720p, 1080p. After the recording, you can make your recorded videos more appealing by adding logos, pictures and texts in to it. You can turn mic on so You will not be facing any difficulty to talk over your recordings. There is a Facecam feature also in this app that let you record yourself by turning the front camera.

There are more things to explore in this app, so you should try it once to know how useful it would be.

ADV Screen Recorder is another good screen recorder application for Android that has similar features like AZ Screen Recorder that we will see later in this list. It let you record the phone’s screen with the audio using phones inbuilt microphone. Just like some other screen recorder you can switch video resolution, frames and bit rates, etc. This application also does not required any rooting process in order to recording the screen. 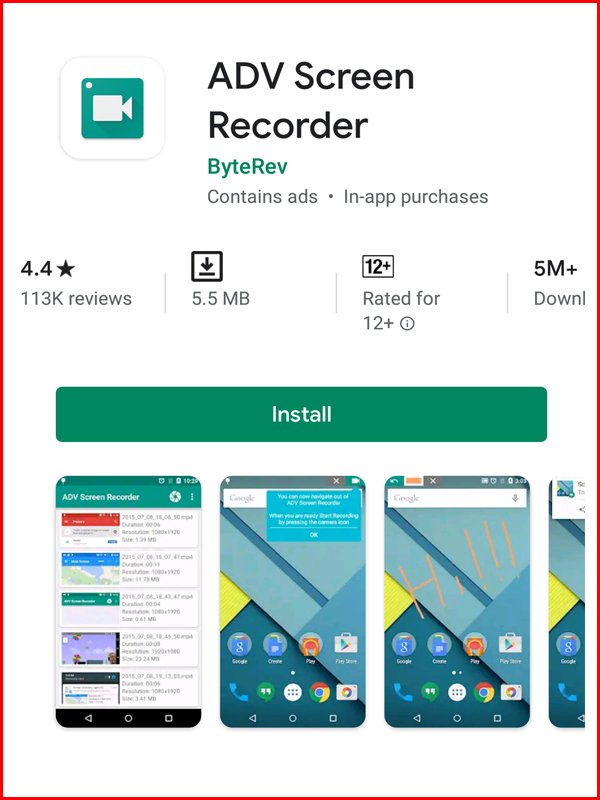 You can make use of its both as front and the back cameras. You can pause the recording whenever you need to do it. Unlike the other  apps in the list, ADV Screen Recorder does not put any watermark when the recording is finished. You will see the countdown of 3 before it starts screen recording on your phone. This application is free lightweight and does contain some advertisement along with in-app purchase.

This first application that I have use in my phone for the screen recording purpose. As I said earlier, AZ Screen recorder and ADV Screen Recorder both have very much identical features. Talking about the similarities, AZ Screen Recorder does not requires root access, you can play and pause the recording(same as ADV), that is a very useful feature. However, use it’s paid version to unlock front-facing camera overlay feature. The interface of the application is very simple and you can change settings like resolution, frame rate, bit rate, etc. Adding more, you can even add text and logo Any your recorded video make it more catchy and attractive. Audio for the video will be recorded buy inbuilt microphone in the phone. 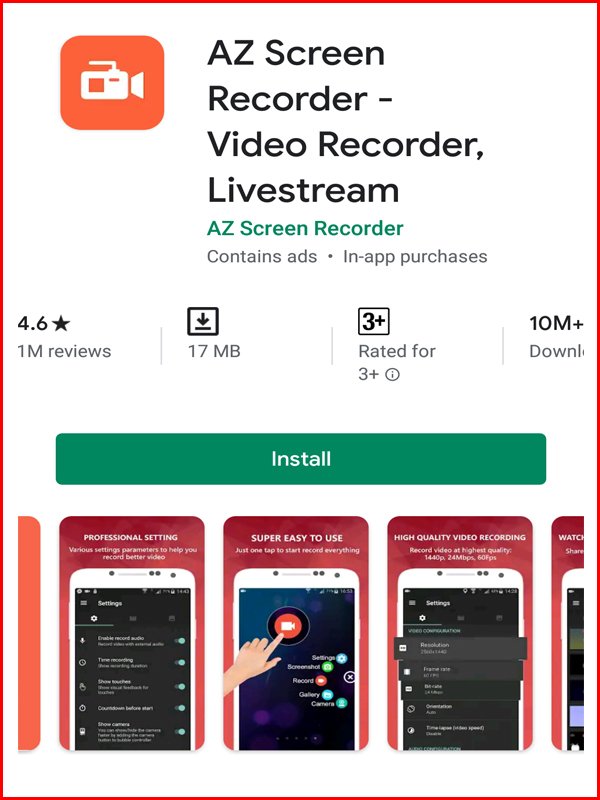 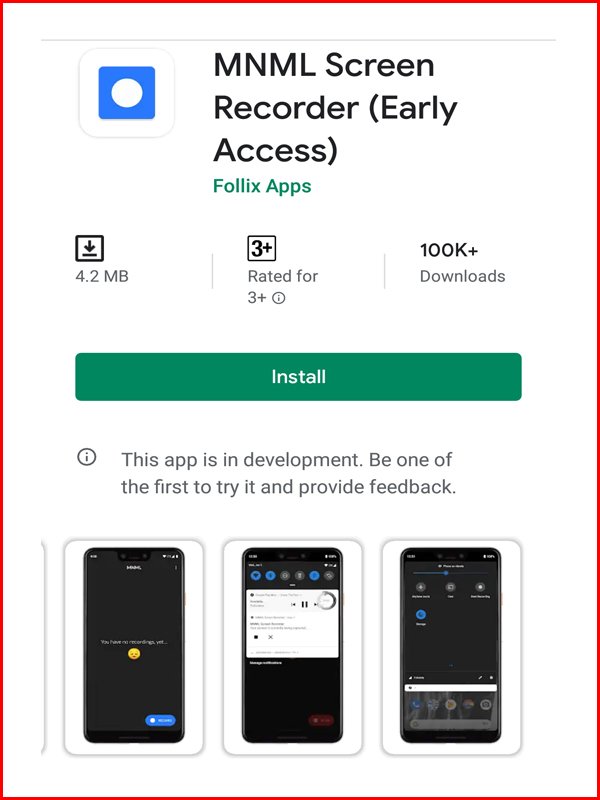 Looking at the MNML Screen Recorder UI, you will get white, blue theme and also a dark theme in the app. A user can set time to its UI automatically dark mode on specific time . You can record the screen video at up to 60fps with bit rates up to 24 Mbps. Before starting the recording a 3 second countdown that I use but you can also set it to 5 second as per your choice. However, you can only record video at  up to 1080p resolution that should be increase for sure. Recording quality of this application is excellent and you can set video resolution and it frame rate as well.

You can get this app from Google Play Store as well as from Github. So, let’s enjoy this free Android screen recorder by downloading from these two sites.

Just like the application at no. 5, Screen Cam recorder is also light weight open-source program with less settings option and without unnecessary ads. It works without root access and supported phone running on Lollipop 5.0 or above. You can choose between different bitrates, resolution, and FPS want to use (up to 60fps). It records audio from phones mic. However, internal audio recording requires root access. So, for this you need root your smartphone using magisk module if you want. 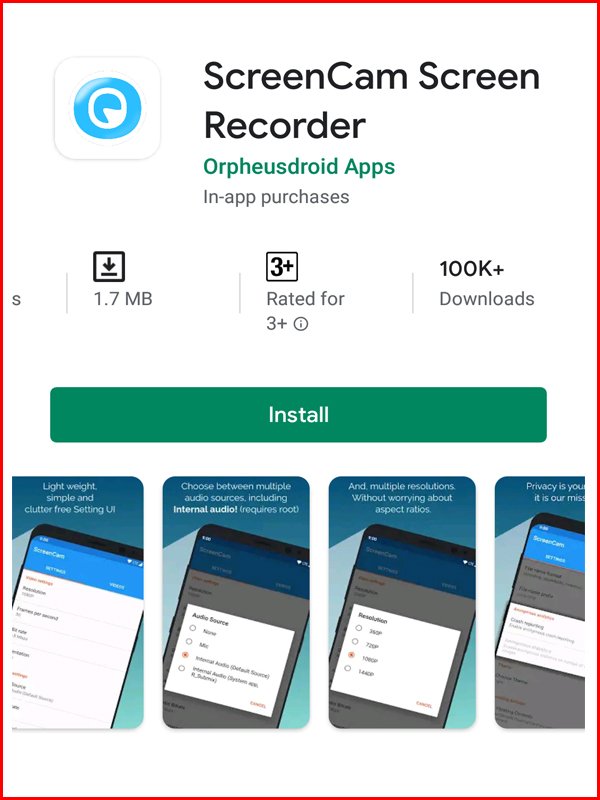 The application is light weight with clean UI and has floating controls on phone’s screen. You can also choose storage folder when recording id finished.

One downside of ScreenCam Screen Recorder is that it lacks the picture-in-picture mode. So you can’t utilize the front camera while recording the screen.

RecMe Screen Recorder is one of the best and powerful screen recorder for Android phones. This application comes with all those features as other apps in the list has. It user-interface is clean and easy to use. 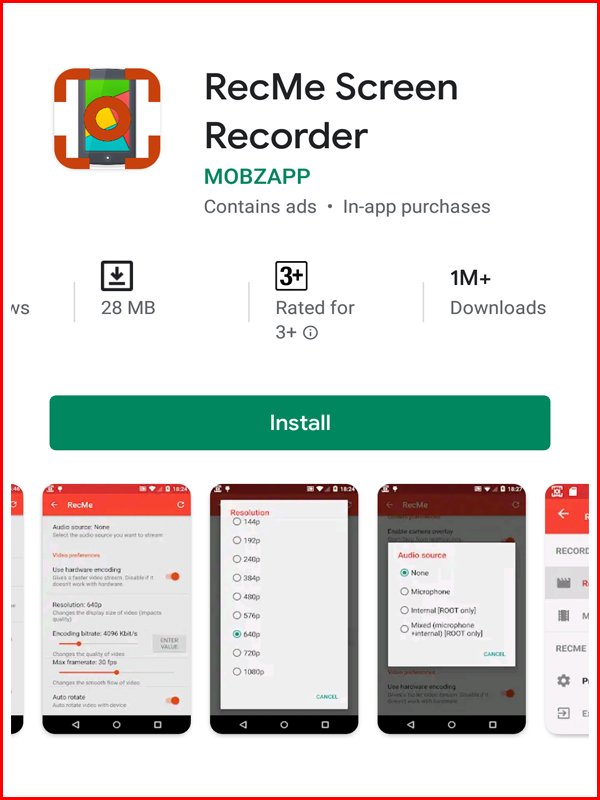 RecMe is one of only a handful not many screen recording applications that, when utilized on a rooted device, can record inner audio just as video. If your smartphone isn’t rooted, you will miss the internal audio recording feature in this app. However, you still have plenty options like front screen recording, including up to 60fps 1080p video quality, a front/back camera overlay (for Pro users), and microphone recording. It has many settings in the app to optimize performances and quality. You can choose to record in MP4 or MKV video as per your choice.

Mobizen is the most simple, advantageous screen recorder that enables you to record, catch and edit your recorded video. This application is available on the Play Store for free. It has features to full HD recording at 60fps and trimming, splitting and cutting of recorded video to its right length. In its editing mode, you can an Intro & Outro to the video to make it more appealing. It’s especially useful for gaming, letting you record your sessions simultaneously as recording your face responding to the on-screen activity. 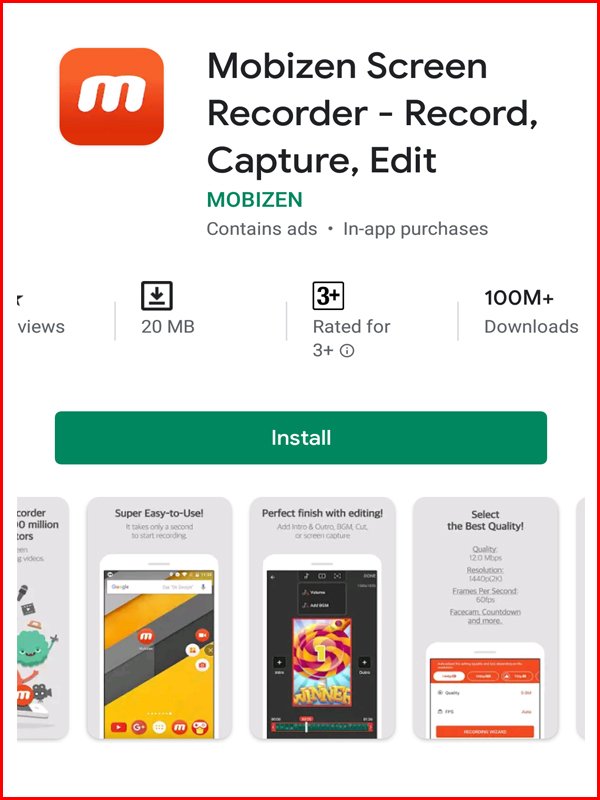 In Rec. screen recorder you will get tons of customization feature but one thing you should note it requires your phone rooted if device is running on Android 4.4 or less. Otherwise works seamlessly on device running on Android 5.0+ or above. In free version of Rec. Screen Recorder you will only get the basic features like custom resolution, custom bit rate, a countdown timer of 10 seconds, and the option to include audio. You will get more features if you buy its pro version with an in-app purchase. 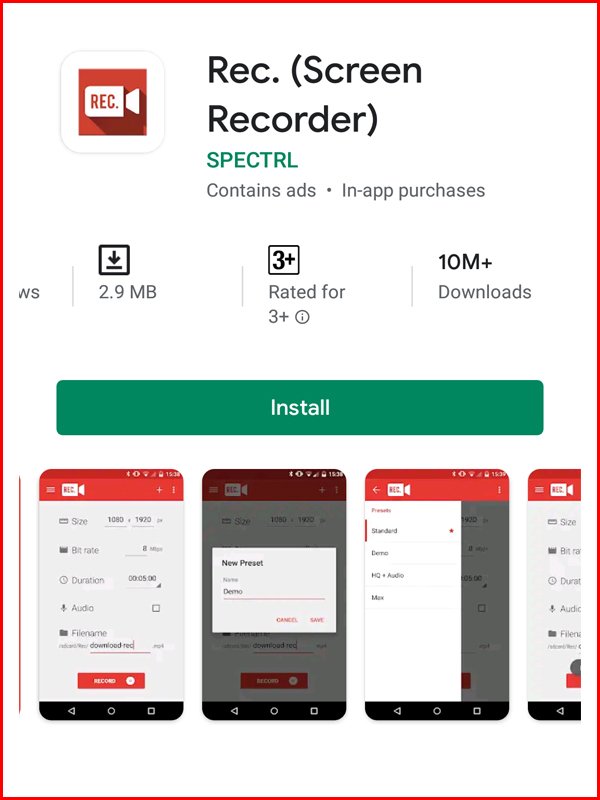 When you have its pro version, the app will get features like shaking your device to stop the recording, hiding the floating notification for the app, customized timer, defining presets, and even an ad-free experience. The app gives you longer screen recording with Audio (can record up to 1 hour).

This my might be the best application if you do not want to use any third-party apps for screen recording of your Android device’s screen. Particularly if you are more concern about your mobile gaming and want to record game-play. Then Google Play games might be the best choice for this. 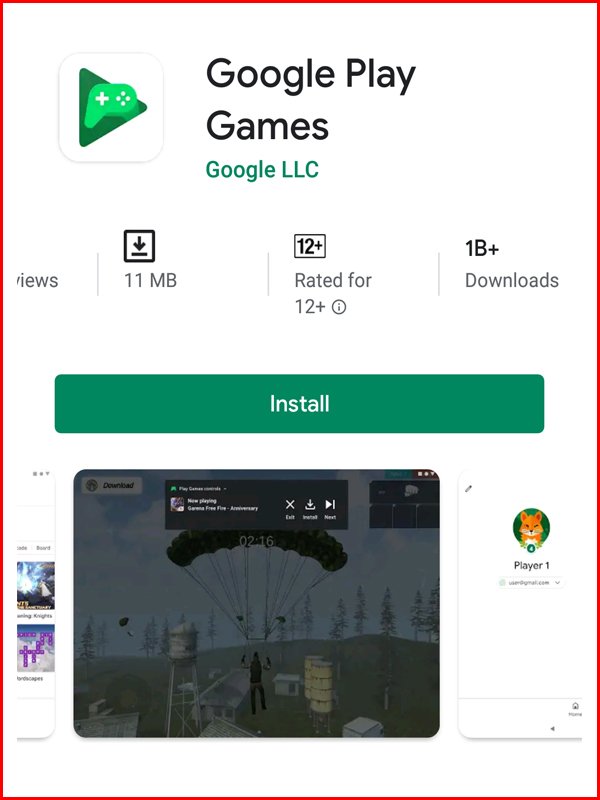 Simply open the Play Games application, go to a game’s information page and look for the “Record” icon and tap. You’ll get choice to record in 480p and 720p (not in 1080p).

To record non-gaming stuff, follow the above steps, then just exit the game when it launches.